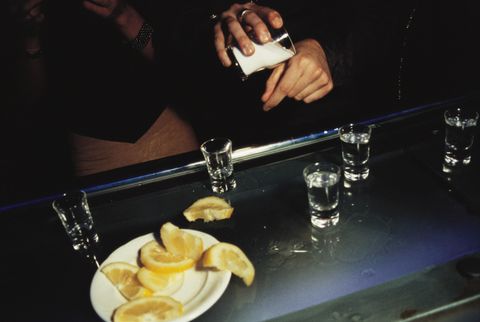 When you find out that chocolate is healthy and drinking isn't just fun, it's good for you—by god, you want to believe it. But new research published in the Journal of Studies on Alcohol and Drugs is throwing major shade at all those other studies that link longevity to moderate alcohol consumption (drinking up to one drink a day for women, two for men).

When researchers analyzed 87 existing studies on alcohol use and mortality, they found some gaping flaws. The biggest problem? Many of the studies that compared moderate drinkers to people who didn't drink at all and appeared to prove that drinking led people to live longer didn't account for sick people who had laid off booze to abide by their doctors' orders. In other words, they ignored the fact that some teetotalers were more likely to live shorter lives because of poor health—and it had nothing to do with turning down that glass of wine with dinner.

Because life isn't fair, when the researchers accounted for abstainers' health and re-accessed the old studies' data, the link between moderate alcohol consumption and living as long as humanly possible all but disappeared. People who popped a bottle here and there ("occasional drinkers") seemed to live the longest—but it'd be silly to give the seldom margarita all the credit.

That's not to say that alcohol lacks all of its alleged merits, like promoting recovery among endurance athletes, which still seems to check out. Not running marathons? Rest assured that booze is still—and always will be!—an A+ recipe for a good time. (Which isn't nothing!)