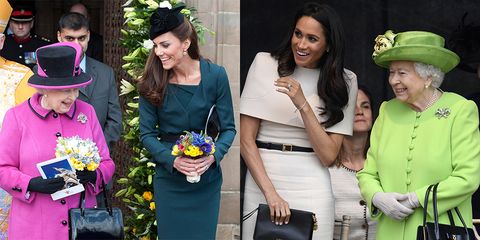 Meghan Markle—a.k.a the Duchess of Sussex—has officially attended her first solo event with the Queen. And although joining the matriarch for a public appearance is a part of royal protocol, Meghan's day comes less than a month after she tied the knot with Prince Harry.

For reference, Kate Middleton didn't make her first official outing with the Queen until almost a year after her wedding in 2011—the Duchess of Cambridge tagged along for a day of appearances during the Queen’s Diamond Jubilee tour (a celebration of her 60-year-reign) on March 8, 2012. So, how exactly did Kate and Meghan's solo debuts compare?

Unlike Meghan, who opted for a nude hue Givenchy dress with a layered cape, Kate sat alongside the Queen in a blue, peplum suit by L.K. Bennet and a black fascinator by James Lock. Suffice it to say, both looks were a lot more low-key than the Queen's vibrant-as-heck dress suits.

The Queen and the Duchess of Cambridge watched a dance performance in Leicester's De Montfort Square, later followed by a fashion show at De Montfort University. The day was topped off with a visit to Leicester Cathedral, where the two held bouquets of flowers and smiled at each other.

Meanwhile, Meghan and the Queen opened the new Mersey Gateway Bridge and Catalyst Science Discovery Centre museum in Cheshire and will later travel to Chester, England about a half hour away to open the Storyhouse Theater. It's safe to say it's a lot more low-key than the Queen and Kate's day together.

Related Stories
Meghan Attends Her First Event as a Duchess
Meghan Markle Was "Nervous" at Trooping the Colour
This content is created and maintained by a third party, and imported onto this page to help users provide their email addresses. You may be able to find more information about this and similar content at piano.io
Advertisement - Continue Reading Below
More From The Ultimate Guide to the Royal Family
The Queen's Corgis Are Helping Her With Her Grief
Charles is Looking Forward to Seeing Harry Again
Advertisement - Continue Reading Below
Will & Harry to Walk Together at Philip's Funeral
Prince Charles Addresses Prince Philip's Death
Prince William Pulls Out of 2021 BAFTA Appearances
Prince Philip Said He Had No Desire to Live to 100
The Queen Was by Prince Philip's Side When He Died
Prince Harry Is "Really Upset" Over Philip's Death
Will Harry & Meg Attend Prince Philip's Funeral?
The Queen Is Hopeful Prince Harry Will Return Home