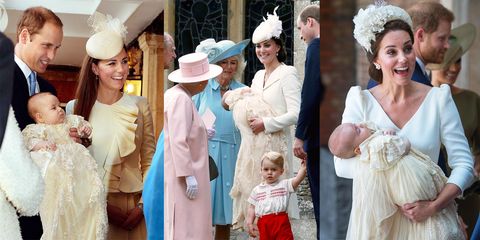 After patiently waiting for a second-ever glimpse of Prince Louis of Cambridge, the day has finally arrived—the littlest prince is being christened in the Chapel Royal at St. James' Palace in London. Ahead, we break down the exact details of Louis' christening and explain how it compares to siblings George and Charlotte.

A then-three-month-old Prince George was christened in the Chapel Royal at St. James' Palace in London on October 23, 2013. The private service reportedly lasted 45 minutes. The Archbishop of Canterbury Justin Welby was the presiding priest at George's service.

Up until 2008, royal children were baptized in a traditional Honiton lace gown that dated back to 1841. The gown—which was first worn by Queen Victoria's daughter—was officially declared too delicate ahead of the christening of James, Viscount Severn, so the Queen's dressmaker and assistant Angela Kelly was tasked with creating a replica. George also wore the replica for his 2013 ceremony.

Unlike her brother, Princess Charlotte was christened at the Church of St. Mary Magdalene on the family's Sandringham Estate. Charlotte's July 5 service, like George's, was conducted by Archbishop of Canterbury Justin Welby.

The little princess also wore Angela Kelly's replica of the historic Honiton lace gown, which is likely to be passed down through the coming generations of royal children.

On July 9, 2018, Prince Louis was christened in the same location at his brother George, the Chapel Royal at St. James' Palace in London. Louis is Kate and William's third child to be christened by Archbishop of Canterbury Justin Welby.

Just like George and Charlotte, Louis wore the 2008 replica of the royal christening robe.

This content is created and maintained by a third party, and imported onto this page to help users provide their email addresses. You may be able to find more information about this and similar content at piano.io
Advertisement - Continue Reading Below
More From The Ultimate Guide to the Royal Family
The Queen's Corgis Are Helping Her With Her Grief
Charles is Looking Forward to Seeing Harry Again
Advertisement - Continue Reading Below
Will & Harry to Walk Together at Philip's Funeral
Prince Charles Addresses Prince Philip's Death
Prince William Pulls Out of 2021 BAFTA Appearances
Prince Philip Said He Had No Desire to Live to 100
The Queen Was by Prince Philip's Side When He Died
Prince Harry Is "Really Upset" Over Philip's Death
Will Harry & Meg Attend Prince Philip's Funeral?
The Queen Is Hopeful Prince Harry Will Return Home