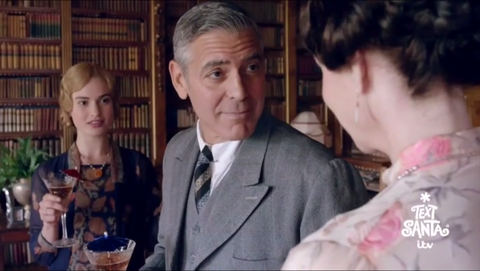 Congratulations, Downton Abbey and George Clooney fans (i.e. everyone): The 2014 version of the much-anticipated Downton Abbey Christmas sketch is finally here and it's amazing.

The video, which is about 9 minutes long, was filmed as part of a "Text Santa" initiative—a UK charity telethon that has raised over $10 million to benefit charities this year. And the concept is a winner: The sketch is a sort of It's a Wonderful Life re-telling in which Lord Grantham loses all the estate's money (again!), forcing him to wish he'd never been born and, consequently, see what life at Downton would be like if he had never existed.

RELATED: You Can Now Spend the Night at Downton Abbey

The whole video is surprisingly clever, irreverent, and charming, and it's completely worth re-watching just for the part where the Dowager Countess slumps off the couch in a swoon after being kissed on the hand by the dashing George Oceans. But the best part is perhaps when Lord Grantham approaches the writer, Julian Fellowes (another brilliant cameo), and says "I don't think any of this makes any sense," to which Fellowes retorts: "Don't worry about that, nobody cares." Zing!

Season 5 of Downton Abbey premieres on January 4 at 9/8C on PBS.