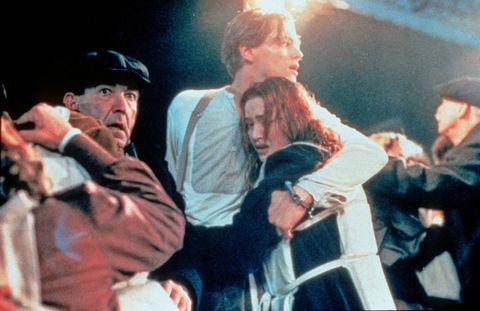 Sometimes, the Internet dredges up gold, such as long-forgotten yearbook photos or home videos of 13-year-olds who, oh, grow up to be Kim Kardashian. This is not one of those times.

A second deleted scene from Titanic has been making the rounds recently, and it's only marginally less painful to watch than the first, which, if you'll remember, features the line, "That really sucks, lady!" In this castoff, Kathy Bates' blowsy Molly Brown orders a waiter to bring her more ice as the doomed vessel sails past a huge chunk of frozen water that will ultimately bring death and destruction to 1,517 people. Tasteful.

Watch James Cameron's wimpy attempt at irony below, and don't say we didn't warn you.

The Alternate Ending to Titanic Is Laughably Bad

The 12 Most Romantic Movie Scenes of All Time

The 20 Greatest Movie Dresses of All Time