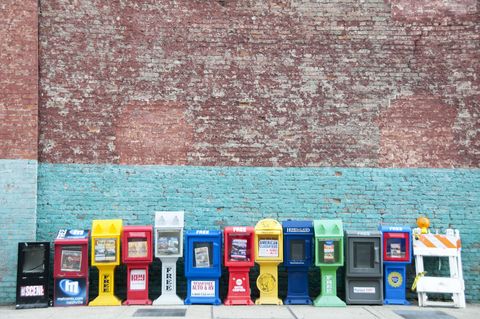 —Seinfeld, in all its eight-season glory, hit Hulu today. See you in a few weeks. (USA Today)

—An autopsy of Freddie Grey revealed that he was killed by one "high-energy injury" to his neck and spine, which is suspected to have occurred when the police van made a fast stop. Regardless his death is being ruled a homicide, since police officers didn't take the necessary precautions. (Baltimore Sun)

—Etsy, Walmart, eBay, Sears, and Amazon have banned the sale of Confederate flags in solidarity with protests against the flag after the shooting in Charleston last week. (Wired)

—Anyone looking for their next Kit Harington fix can get it on new thriller Brimstone. (The Hollywood Reporter)

—A severe heat wave in Pakistan, where temperatures have soared as high as 113 degrees, has killed nearly 750 people. (The Guardian)

—There are going to be *more* Spider-Man movies, and the titular role will be played by 19-year-old Brit Tom Holland. (Variety)

This content is created and maintained by a third party, and imported onto this page to help users provide their email addresses. You may be able to find more information about this and similar content at piano.io
Advertisement - Continue Reading Below
More From Culture
'The Circle' USA Is Actually Filmed In the U.K.
Pre-Order These Highly-Anticipated 2021 Books
Advertisement - Continue Reading Below
The 25 Most Underrated Films Ever Made
Were the Paintings in 'This Is a Robbery' Found?
'Bridgerton' Season 2: Everything We Know
New True Crime Books You'll Obsess Over
The 'Who Killed Sara?' Cast: Your Complete Guide
The 'Paradise City' Cast Plays Trivia
Sad Movies for When You Need a Good Cry
What Happens When Prince Philip Dies?