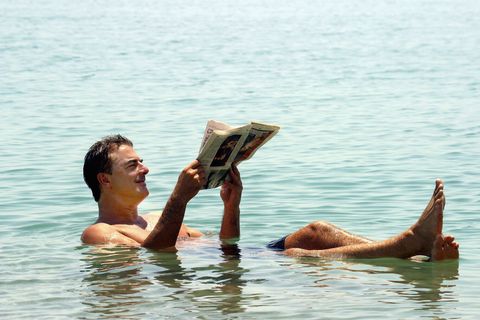 —The Oscars might finally fix their old-white-guy problem—in a poll of new voting members, there's more gender and ethnic diversity than ever before. (Oh but: Women still make up less than 25% of the inductees.) (The Hollywood Reporter)

—Three lesbian couples are having to sue the Arkansas health department because it won't allow them to put both mothers' names on the baby's birth certificate. (Jezebel)

—A new study reveals that most young American teens "strongly disapprove" of marijuana use. (American Journal of Drug and Alcohol Abuse)

—In honor of the company's 20th birthday, today is Amazon Prime Day, which means you get some pretty steep deals—if you have Prime, of course. (The Verge)

A shot from yesterday's Pluto fly-by, showing Pluto on the right and its moon on the left
Getty Images
Jessica Pels Editor-in-Chief As the editor of Cosmopolitan, Jess oversees the editorial for all of Cosmo's efforts across print, digital, video, and emerging platforms.
This content is created and maintained by a third party, and imported onto this page to help users provide their email addresses. You may be able to find more information about this and similar content at piano.io
Advertisement - Continue Reading Below
More From Culture
Queen of the Screen
The 12 Sexiest LGBTQ+ Movies Around
Advertisement - Continue Reading Below
53 Wild and Completely Iconic Vintage Porn Films
Dale Moss Is a Super Important 'Bachelorette' Star
It's Been a Weird Year for 'The Bachelorette'
Political Books to Read Ahead of Election Day
The Sexiest Movies on Amazon Prime
HBO Is Giving Fans 2 Special 'Euphoria' Episodes
What to Know About Tayshia's 'Bachelorette' Cast
Clare Crawley's 'Bachelorette' Cast Is Out