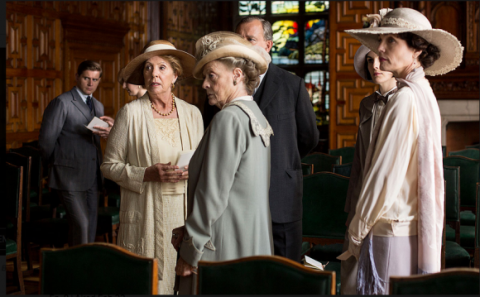 The promos make it look like Lord Grantham and hangers-on are boarding up that grand old house and setting off for less-expensive pastures, but apparently, it's not "Time to Say Goodbye" for everyone.

According to Digital Spy, Rose Leslie will reprise her role as housemaid Gwen Harding, who left the estate in season one to take a job as a secretary. Of Gwen's post-Downton life we know little, except that she got married two seasons ago and shot Jon Snow with three arrows before being murdered by a child in cold blood.

Oops. Mixed up my shows.

Chelsea Peng I'm Chelsea Peng, the assistant editor at MarieClaire.com.
This content is created and maintained by a third party, and imported onto this page to help users provide their email addresses. You may be able to find more information about this and similar content at piano.io
Advertisement - Continue Reading Below
More From Culture
The 24 Best New Christmas Movies of 2020
Meet the Cast of Netflix's 'Virgin River'
Advertisement - Continue Reading Below
Watch the Trailer for the New 'Euphoria' Special
Zac Clark Could Be a 'Bach' Frontrunner
It's Been a Weird Year for 'The Bachelorette'
This Guy Is a Frontrunner on 'The Bachelorette'
Will There Be a Season 3 of 'Virgin River'?
Unique Gifts for the Coffee Lover In Your Life
Want a Spooky Read? Order 'Plain Bad Heroines'
Listen to These Sad Songs If You Need a Good Cry