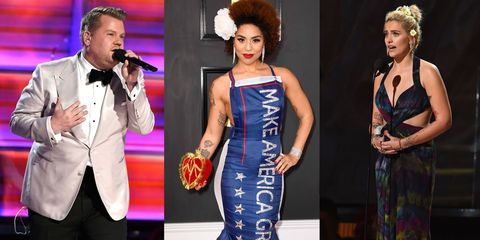 Awards season predictions are yet one more thing that have been shaken up beyond recognition in 2017. Because in Donald Trump's America, the prediction game isn't just about who's going to win, but who's going to make the most politically-charged statement of the evening. Here's a rundown of all the major political moments from the 2017 Grammy Awards.

The political controversy kicked off way before the ceremony itself, when singer Joy Villa made this bold fashion choice on the red carpet: a skintight red, white, and blue number blaring both Donald Trump's name and his campaign slogan in huge letters, which she dramatically unveiled from under a white cape.

The inevitable Trump shout-out came early on in the show: "With President Trump we don't know what comes next / We sit here tonight, don't matter our race, where we were born or color of face / using this art, remember forever, we can survive by sticking together," Corden rapped in his opening number.

J.Lo took the stage to remind the assembled crowd of creatives of the value—and responsibility—they have at politically unstable times like this. "This is precisely the time when artists go to work," she said, quoting Toni Morrison. "No time for despair, no place for self pity, no need for silence & no room for fear. We do language."

While introducing The Weeknd, 18-year-old Paris Jackson told the crowd: "We could really use this kind of excitement at a pipeline protest, y'all."

5. Katy Perry promotes the Constitution alongside her new single

Outspoken Hillary Clinton supporter Katy Perry was always going to make some kind of statement, and her performance was a powerful reminder that visuals can speak louder than words. While performing her new single 'Chained To The Rhythm', Perry wore a "PERSIST" armband, and later appeared in front of a backdrop where lines from the Constitution were projected in huge letters. As several people on Twitter suggested, maybe she's hoping Donald Trump will finally read it now that it's on TV.

Bey's speech was arguably the most articulate and passionate of the night, and though she kept overt politics to a minimum, her message was clear as she discussed her artistic intentions in Lemonade. "My intention for the film and album was to create a body of work that would give a voice to our pain—our struggles, our darkness, and our history. To confront issues that make us uncomfortable. It's important for me to show images to my children that reflect their beauty, so they can grow up in a world where they look in the mirror—first through their own families, as well as the news, the Super Bowl, the Olympics, the White House, and the Grammys—and see themselves, and have no doubt that they're beautiful, intelligent, and capable. This is something I want for every child of every race, and I feel it's vital that we learn from the past and recognize our tendencies to repeat our mistakes." Amen to that, now more than ever.

Gavin Grimm, a transgender teenager from Virginia who sued his high school for the right to use the boys' bathroom, will have his case heard in the Supreme Court next month. Needless to say, the case has taken on new stakes under the Trump-Pence administration. Laverne Cox used her time onstage to call attention to Grimm, as well as the #StandWithGavin hashtag his supporters are using. The ACLU were among many to thank Cox for this invaluable shout-out.

The last political moment of the night was also the boldest and most direct. "I wanna thank President Agent Orange for perpetuating all the evil that you've been perpetuating throughout the United States," Busta Rhymes declared, as he took the stage partway through A Tribe Called Quest and .Paak's performance. "I wanna thank President Agent Orange for your unsuccessful attempt at the Muslim ban. Now we come together!"

Right after this statement, a symbolic wall was knocked down onstage and people of various nationalities – some wearing headscarves – filled the stage in a powerful display of unity. "We'd like to say to all those people around the world who are pushing people who are in power to represent them, we represent you," Tribe's lead rapper Q-Tip said, before the performance drew to a close with chants of "Resist".