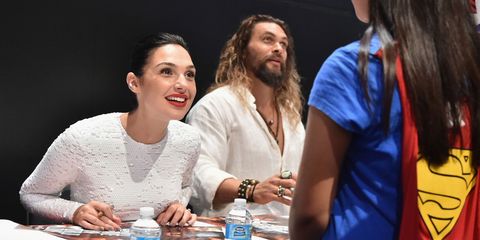 In the cutest footage captured at Comic-Con, a young fan was spotted meeting her icon, Gal Gadot. According to Just Jared, the fan was attending an autograph signing of the Justice League cast, when she started crying. Gadot spoke to the fan for over a minute, to reassure her.

Their interaction only makes it crystal clear just how important Wonder Woman is for women and girls everywhere. Finally, young women around the world have a strong, powerful, and complex woman with super powers to look up to, with a successful, big budget superhero movie under her belt.

.@GalGadot shared a moment with a young Wonder Woman cosplayer while signing autographs with the Justice League at San Diego @Comic_Con pic.twitter.com/KZhucQd0yC

As superhero movies are routinely led my male characters, Wonder Woman's appearance as part of the Justice League, and following on from the major success of her solo movie, is so important. Women not only have a role model, they get to see themselves represented onscreen, a lack that has been overlooked for far too long.

According to Just Jared, Ezra Miller, who is playing The Flash in Justice League, told Gadot's fan that she can "come join the Justice League whenever you're ready," an offer most of us would love to hear.