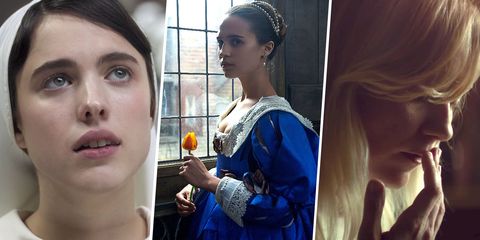 Smell that? It's the scent of pumpkin spice latte threatening to invade every single aspect of your life. In other words, fall is almost upon us, and the only place you can take refuge from PSL mayhem is the movie theater. Fortunately, a slew of genuinely wonderful new movies are coming out, which range from Oscar bait, to hilarious, to "OMG-this-is-terrifying-what-is-life" (hi, It!). Here's what to expect.

About: A man who's diagnosed with polio shortly after falling in love, but manages to live life to the fullest and escape the confines of his hospital ward with his partner. Expect to weep—and check out MarieClaire.com's exclusive poster reveal right this way.

'The Killing of a Sacred Deer'

About: A family's relationship with a teenage boy they've taken into their care, and the devastating effect it has on them when everything turns into a full blown revenge plot. (Also this is a psychological horror movie so be prepared to freak out—the trailer is truly terrifying. Like, not It terrifying, but still.)

About: A young woman who gets "called" to be a nun and decides to move into a convent—only to find out that it's not exactly what she expected. This movie looks stunning, so get ready.

About: A married woman's affair with an artist, set against the backdrop of Amsterdam's tulip market. FYI, there's quite a lot of buzz around this movie—not just because of the graphic sex scenes, but because of the *huge* delay in making it.

About: A woman who launches a billboard-based smear campaign against local police after her daughter is murdered and they don't do enough to help. It looks funny AF, and based on the trailer, Frances McDormand absolutely slays.

About: Three Marine buddies who reunite for a military funeral when one of their sons is killed in combat. A poignant movie about friendship—and clearly a big moment for Steve Carell. Directed by Richard Linklater.

About: The early days of Winston Churchill's time as Prime Minister of England during World War 2. A must-watch for people who are into The Crown, British drama, and accents.

About: A girl who runs away from home to find her idol in the 20s, and a boy who runs away to find his missing father in the 70s. Or, less specifically, about the nostalgic wonder of childhood. Either way, it looks just lovely.

About: The hugely important and under-told story of Thurgood Marshall's early career—before he won Brown vs. Board of Education, and before was the first black Supreme Court justice.

About: The story of Olympic-class skier Molly Bloom and the illegal poker ring she ran. Directed by Aaron Sorkin, and sure to be Oscar-worthy because of it.

About: A team of med students who decide it'll be fun to stop their hearts and experiment with death. Because what could possibly go wrong? (Answer: literally everything, judging from the horrifying trailer.)

'Battle of the Sexes'

About: The epic and history-making tennis match between Billy Jean King and Booby Riggs that took place in 1973. (Also, 2017 is going to be a great year for Steve Carell.)

About: A secret spy organization that fights to save the world from a casual criminal mastermind.

About: A deranged clown named Pennywise that terrorizes a group of children. Because sure! Based on the classic horror novel by Stephen King.

'The Mountain Between Us'

About: Two strangers who survive a plane crash and end up stranded together. Romance blooms, as you might expect might happen when stuck in the wilderness with Idris.

About: A blade runner named Officer K who finds out a secret that leads him to discover Ford's Rick Deckard—who's been missing for 30 years. It's a sequel to the famous 1982 film.

About: Thor's journey saving Asgard from Hela (played by Cate Blanchet). Also Loki is chillin' because duh, what would this franchise be without him.

'Murder on the Orient Express'

About: A murder that takes place on the famous Orient express. Everyone's a suspect.

About: Batman and Wonder Woman (blessed be her name) assembling a team of superheroes—including The Flash, Superman, and Aquaman—and defeating a new nemesis. Exciting, but if Wonder Woman and Batman get together...like, NO.

About: The creation story of Winnie the Pooh, and the life of author A. A. Milne.

About: An art exhibition at the Stockholm Palace and the publicity surrounding it. FYI, this won the Palme D'Or at Cannes.

About: The real story of Jeff Bauman, who lost his legs during the Boston Marathon Bombing.

About: A woman who goes on a paranoid drug trip. Directed by the Rodarte sisters.

About: A single mom in L.A. who gets three new male roommates. Let the romantic hijinks ensue.

About: The relationship between Queen Victoria and her servant. Must-watch viewing for anyone into Victoria the series.

About: The story of Mary Magdalene, friend of Jesus.

About: A detective who investigates the disappearance of a woman after her scarf is found wrapped around a snowman.

About: There isn't much known about this film's plot, but according to IMDb "a home invasion rattles a quiet family town." Directed by George Clooney. Written by the Coen brothers.

About: A couple whose lives are disrupted when a guest comes to their home. Also this is a horror film, so be prepared for terror.

'Call Me By Your Name'

About: A love story between a late-teen boy and a doctorate student in 1980s Italy. There are two Sufjan Steven songs on the soundtrack and the film looks beautiful, so get ready for feelings.

Mehera Bonner Contributor Mehera Bonner is a news writer who focuses on celebrities and royals—follow her on Instagram.
This content is created and maintained by a third party, and imported onto this page to help users provide their email addresses. You may be able to find more information about this and similar content at piano.io
Advertisement - Continue Reading Below
More From Culture
Will There Be a Season 3 of 'Virgin River'?
What We Know About Part 2 of 'Lupin'
Advertisement - Continue Reading Below
'The Bachelor' Is Back!
Who Is "Queen" Victoria on 'The Bachelor'?
A Guide to the Fairies of 'Fate: The Winx Saga'
'You' Season 3 Is Adding a Menacing Character
'Fate: The Winx Saga' Season 2: Everything We Know
Who Is Michelle Young on 'The Bachelor'?
Who Is the Voice on the Radio in 'WandaVision'?
Everything We Know About Matt James