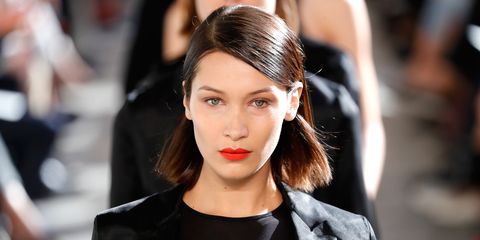 Taking to Instagram over the weekend, Hadid shared a series of photos introducing her alter ego to the world. Without any explanation regarding the new character, Hadid donned a blonde wig, and went about her everyday life:

But that's not all. Hadid also appeared to create an Instagram account especially for Rebekka Harajuku, in which photos of the alter ego are posted, along with captions explaining what she's being doing.

Firstly, there was "Bekka as seen today in Shibuya, Tokyo, Japan. 🇯🇵":

Then, "Rebekka Harajuku and her friend Jenny Nogizaka as seen in Tokyo tonight. 🇯🇵":

She posed with the doorman and wrote, "Rebekka as seen this past weekend in Shibuya, Tokyo. 🇯🇵":

Later, there was a shot of simply, "Rebekka being Rebekka yesterday in Harajuku, Tokyo 🇯🇵" as she visited a store and dressed up in mismatching clothes, including a cap with the word "loser" embroidered on it:

"Bex" was then "Caught in Shabuya 🇯🇵" unexpectedly:

And then one of Hadid's friends donned the wig, with the caption, "Rebekka wondering where her Juul charger is":

Rebekka is currently following just 5 people (including Hadid, of course), and has already amassed almost 14,000 followers.

The fact that the account is followed by Hadid, and that she posted about the character on her own Instagram first, seem to indicate that she created the alter ego.

Maybe everyone needs a blonde alter ego they can turn to in times of need?

Related Story
Bella Hadid Takes On Online Troll For Body Shaming
Amy Mackelden Weekend Editor Amy Mackelden is the Weekend Editor at HarpersBAZAAR.com, where she writes about entertainment, celebrity news, beauty, and fashion.
This content is created and maintained by a third party, and imported onto this page to help users provide their email addresses. You may be able to find more information about this and similar content at piano.io
Advertisement - Continue Reading Below
More From Fashion
Spring 2021's Best Trends: Bras, Cutouts, Florals
Leather Leggings Are Better Than Jeans, Hands Down
Advertisement - Continue Reading Below
40 White Elephant Gifts You’ll Want to Steal
Princess Charlene of Monaco's Top Looks
Cozy Sweaters That Conjure Up Fireplace Vibes
The Shoe Trends of Winter 2020
Key Fashion Trends to Know for Fall 2020
How to Wear Chanel Pumps
The Most Controversial First Lady Fashion Moments
Your Favorite Celebs in Gloriously ﻿'80s Fashion