Cynthia Nixon is running for governor of New York, and one can’t properly run for office without releasing some cool campaign merch right? Right. To get her supporters and Sex and the City fans riled up, Nixon's campaign website launched limited-edition Miranda T-shirts and accessories on Wednesday in honor of SATC's 20th anniversary.

The genius designs were created by the team behind Instagram account @everyoutfitonsatc, and all proceeds will benefit Nixon's gubernational campaign. (I already have my eye on the, "I'm a Miranda and I'm voting for Cynthia" tee in white.) 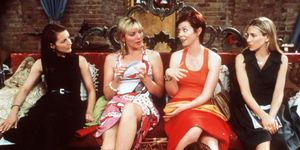 10 'Sex and the City' Secrets You Never Knew
The 12 Most Iconic Looks from Sex and the City
This content is created and maintained by a third party, and imported onto this page to help users provide their email addresses. You may be able to find more information about this and similar content at piano.io
Advertisement - Continue Reading Below
More From Fashion
Your Back-to-Office Style Guide Is Here
Anya Taylor-Joy Was a High-Fashion Princess
Advertisement - Continue Reading Below
Kathryn Hahn Is Dressed to Perfection
The Best Red Carpet Looks at the 2021 Emmys
Dior Photography Award Winner Shares Inspirations
We're Living for This Blast-From-the-Past Fashion
The Leggings You Want When the Weather Gets Brisk
Emily Blunt Is a Modern-Day Ziegfeld Girl
AOC Wore a Dress With a Stark Message
Ella Emhoff Is Fashion's Chicest It Girl