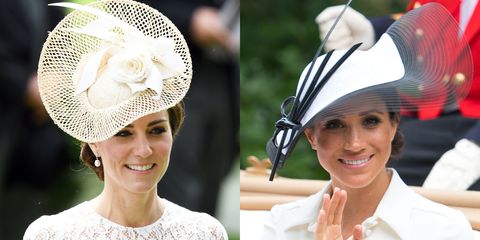 On Tuesday, Meghan Markle attended her first-ever Royal Ascot event with Prince Harry, the Queen, and the rest of the royal family. The Duchess of Sussex wore a cream-colored Givenchy dress with a black-and-white Philip Treacy hat. Noticeably absent was Prince William and Kate Middleton, who likely is at home caring for her newborn Prince Louis.

The Duchess of Sussex's coatdress, however, does seem like something her sister-in-law would wear herself. Kate gravitates towards the more classic styles, and like Meghan, her outfits have inspired a legion of followers, too.

Aside from their outfits, when they chose to make their appearances at the Royal Ascot event differed too. The Duchess of Cambridge attended her first race in 2016, 5 years after getting married, while Meghan experienced this occasion just a month after saying her "I dos." It was reported that while the Queen invited both Prince William and Kate to the Royal Ascot every year since their wedding, the Duchess of Cambridge waited to attend in order to celebrate the Queen's 90th birthday.