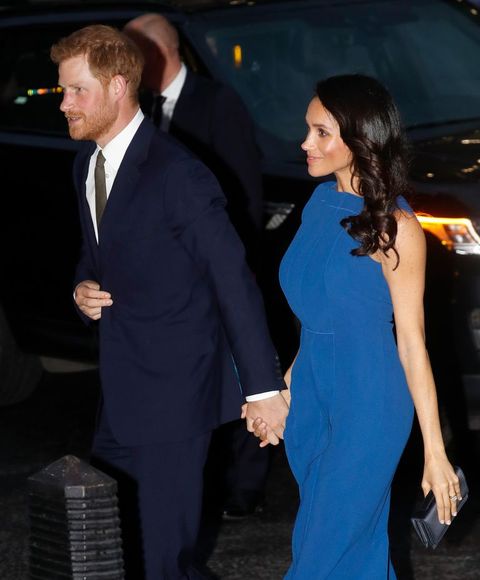 It's a busy week for Prince Harry and Meghan Markle. After attending the Wellchild Awards Tuesday, the couple made another appearance Thursday night for the 100 Days to Peace gala. According to the Royal Armouries website, the event marks "the centenary of the last 100 days of First World War hostilities." The gala serves to support mental health charities like Heads Together, which is spearheaded by Prince Harry and his family.

For the occasion, Meghan wore a blue Jason Wu dress while Prince Harry wore a dark suit. Meghan's outfit was different than her previous two menswear-inspired ensembles. After wearing a Judith and Charles tuxedo dress to see a performance of Hamilton in London last week, she rocked an Altuzarra pantsuit at Tuesday's WellChild Awards. This time around, however, the Duchess of Sussex chose to channel her inner princess in Jason Wu. To complete her gorgeous ensemble, she wore a pair of amazing Aquazzura heels.

Though Prince Harry and Meghan's next appearance has yet to be announced, we do know the duo will head to Australia next month for the 2018 Invictus Games. The overseas trip will also include stops in New Zealand, Fiji, and Tonga, so prepare yourself for all of Meghan's outfit changes.

The Duchess of Sussex, in a dress by Jason Wu, has arrived with her husband Prince Harry for a gala concert in aid of mental health charities, 100 Days to Peace. pic.twitter.com/8ibCbTUctF