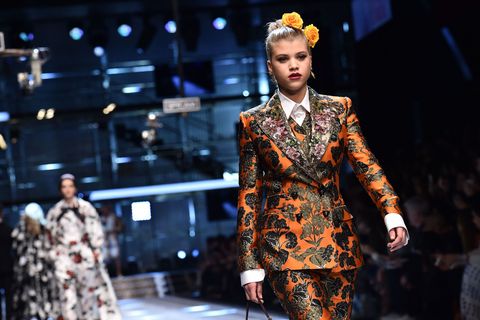 For its Fall 2017 show at Milan Fashion Week, Dolce & Gabbana reached out to Millennials by casting some non-models, including social media stars, influencers, and celebrity children to walk in the show.

According to The Cut, the non-models who walked in the show included social media star Aimee Song, singer Madison Beer, and a long list of second-generation celebs including Anais Gallagher, Delilah Belle Hamlin, Rafferty Law, Sofia Richie, Amanda and Jason Harvey, Dylan Lee, Alexandra and Ella Richards, and Corinne Foxx. There were also a few pros on the runway, including models Lucky Blue Smith, Bianca Balti, and Alice and Charlotte Dellal.

Here are some highlights:

The collection's vibe was overwhelmingly royal, with tiaras and crowns, lots of lace and leopard print, and even a few t-shirts featuring "king" Justin Bieber, because why not?