Few people in young Hollywood are as thoughtful or well-spoken as Amandla Stenberg. The 20-year-old actress, who made her debut as Rue in 2012's The Hunger Games, has spent the last seven years building an impressive résumé, both as an actress and as an activist.

Speaking to ABC News about her recent film, The Hate U Give, Stenberg said:

"I felt like I could relate on a lot of different levels in terms of being biracial and kind of always existing in between in some ways. But then also I had a really similar parallel. I grew up in South Los Angeles, but I went to a school across town that was mostly white and privileged. And so I was waking up in a black neighborhood, but then going to school and being around kids who didn’t really have any way of conceptualizing what my community was or what it felt to be black."

Her most recent role, in the period drama Where Hands Touch, has been met with controversy over its subject matter (it's a love story about an interracial girl in Nazi Germany who falls in love with a member of the Hitler Youth), but Stenberg's performance has been widely praised.

The actress defended the project during a 2018 interview with Variety. "I think it's challenging for people to conceive of a story about the Holocaust that is not centered around the Jewish experience, but the experience of someone else," she said. "But I think what the movie does really beautifully is it demonstrates what happens with these tricky intersections of identity and how we still continue to be human and love and be loved, despite that."

True to form, she's not letting the controversial reaction to her latest project keep her in hiding. Stenberg stepped out last night for W Magazine's celebration of its "Best Performances" Portfolio and the Golden Globes in Los Angeles last night.

Stenberg wore a stunning black crop-top and a flowing white skirt, accessorizing the look with a black and silver bag. When she had to venture outside, she covered up with a casual denim jacket. 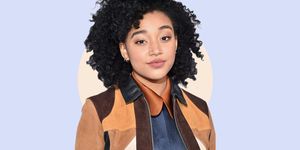 On Bringing Diversity to White-Washed Teen Romance
Kayleigh Roberts Contributor Kayleigh Roberts is the weekend editor at Marie Claire, covering celebrity and entertainment news, from actual royals like Kate Middleton and Meghan Markle to Hollywood royalty, like Katie Holmes and Chrissy Teigen.
This content is created and maintained by a third party, and imported onto this page to help users provide their email addresses. You may be able to find more information about this and similar content at piano.io
Advertisement - Continue Reading Below
More From Fashion
5 Bold Colors That'll Be Everywhere This Spring
Created for From Marie Claire for Created by Marie Claire for
Luxury Stores
The Top Fall 2021 Handbag Trends
Advertisement - Continue Reading Below
The New NYFW Jewelry Collab You Should Know About
10 Ways to Wear Your Favorite Oversized Sweater
Our Fashion Editors' Favorite Patterned Tights
Fall 2021 Trends You Don't Have to Wait to Try
I'm Obsessed With Sweaty Betty's Power Leggings
The Best Finds From The Outnet's Semi-Annual Sale
Silk Pajama Sets to Lounge Around In
Ralph Lauren Will Help Build Your Dream Closet