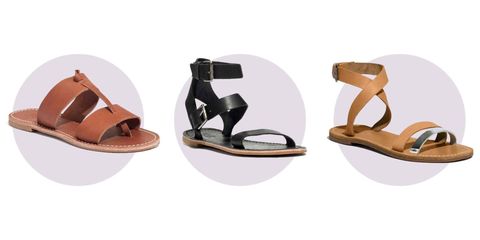 According to a notice issued Thursday by the Consumer Product Safety Commission, Madewell is recalling more than 50,000 pairs of sandals from its spring 2015 collection after buyers reported that the shoes' metal shanks (your ever-expanding vocabulary thanks you) dislodged and broke through the soles, causing wearers to trip and fall.

The J.Crew offshoot is offering full refunds on 10 styles from its "Sightseer" series, which retailed for $60 to $80 in stores, online, and on Shopbop from February to July 2015. Meanwhile, girls in Breton shirts and straight-brim fedoras everywhere are scheduling appointments for tetanus boosters.

Chelsea Peng I'm Chelsea Peng, the assistant editor at MarieClaire.com.
This content is created and maintained by a third party, and imported onto this page to help users provide their email addresses. You may be able to find more information about this and similar content at piano.io
Advertisement - Continue Reading Below
More From Fashion
The Evolution of Engagement Rings
Score Meghan Markle's Bling at Missoma's Sale
Advertisement - Continue Reading Below
It's Time to Get Familiar With the "Shacket"
Jumpsuits: The Ultimate in One-Step Dressing
The Swimwear Trends to Expect In Summer 2021
Meghan Markle's Life in Photos
How Princess Eugenie's Wedding Dress Compares
Celebs Wore THAT to the Airport?!
The Most Iconic Shoe Moments in Film
The Slingback Heels You Need Now