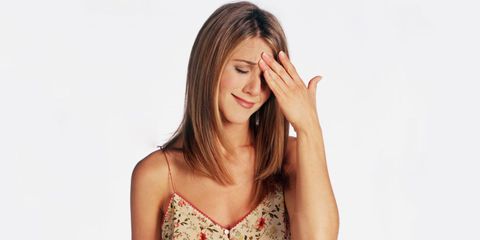 Everyone knows coming up with the right thing to say on dating apps can be hard. But after my last Tinder experiment texting guys using only Carrie Bradshaw quotes proved to be weirdly empowering, I decided to let another famous single woman in the city guide me on my weekly quest to find a soulmate via LTE. Who better than everyone's problematic fave, Rachel Green from Friends?

Man, do I feel this. Literally ME when I decided I wasn't going to date anyone for all of 2017 and Focus on Myself and then my best friend goes and meets her soulmate and I'm just like how could you be so selfish? I thought we had a deal!

Let me preface this by saying while I do have Cosmopolitan listed as my employer on Tinder, I don't have my job title listed. So it's always refreshing when guys automatically assume that A. I write about sex, B. They're important enough to be written about. Bitch, I have DENTAL. Try again, son.

Also, for what it's worth, I totally understand the weirdness of these canned lines. What I don't understand is the need to freak out, have a tantrum if someone doesn't message you back quickly enough, and then backpedal to try to fix the situation with some shitty half-neg. Stay pressed, babe!

I liked this dude's enthusiasm. Guys should use exclamation points more!

4. This Dude Who Cut Straight to the Chase

As soon as he mentioned he was already leaving, I was tempted to run to his airport gate and give some grand speech about my undying love for him. I mean not really, but how fun would that have been?

6. This Guy Who Couldn't Be Fazed

7. This Guy Who Just Wanted to Help

What gave it away?

Let the record show that he waited eight hours between his first and second message. I truly cannot imagine having that much confidence in ANYTHING I say, let alone a pickup line, so good for this guy honestly.

9. The Guy I Actually Know IRL

Funny story, I actually met this guy and his friend five years ago half naked in a hotel hot tub. We lost touch until literally two months ago when I hooked up with his friend and then he added me back on Facebook. Almost like they were shit-talking how bad I am in bed or something?

10. This Guy and His Very Respectable Table-Joke Hustle

11. This Guy and His "Troublemaker" Line, Which, No Thank You

Can men stop doing this "you look like a troublemaker hehe semicolon parenthesis" bullshit in 2017 please? It's tired.

13. This Master of Disguise

After going back and checking, I realized this guy was actually wearing a Navy costume in his photos? Just goes to show that if you throw enough things out there—no matter how weirdly specific they may seem—you might just get lucky!

All in all, it was a ride. It seemed like the Carrie Bradshaw lines yielded better conversations—perhaps because Carrie's quotes mostly came from monologues about relationships and the state of dating, topics everyone is interested in talking about to some extent, rather than Rachel's quippy (albeit iconic) one-liners. I was hoping someone would recognize the quotes (after all, Friends is way more guy-friendly than Sex and the City) but alas, no one did. Who knows, maybe next week I'll try lines from The Sopranos or Law and Order or something, and that'll get them!