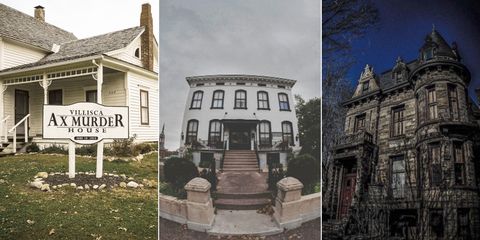 Many of the most terrifying properties are prisons, hotels, and hospitals, but there are also some seriously scary residences that are basically real-life haunted houses. Whether the locations of brutal murders, spooky ghost sightings, or both, the stories behind these creepy houses and menacing mansions are guaranteed to give you goosebumps.

Apparently, there were hangings on the site of this historical San Diego home before it was built, including that of James (aka Santiago) Robinson, or "Yankee Jim," who is one of several spirits said to haunt the house. The owner's daughter, Violet, also killed herself here in 1885. Today, it's a museum and a California Historical Landmark—but its story is nonetheless unsettling.

Almost everybody knows the story of The Amityville Horror, the best-selling book and movie supposedly based on true events. While it is true that on November 13, 1974, Ronald J. DeFeo Jr. murdered his entire family in their beds in their Long Island home, the supernatural events reported by the subsequent owners of the house have been discredited. Still, the real story is gruesome enough to give us chills just by looking at this house.

The strange, brutal murder of Jose and Kitty Menendez in their Beverly Hills mansion at the hands of their sons has mystified the nation since 1989. And with three recent TV reenactments, the case is currently receiving newfound attention. The brothers' defense claimed that they were being abused by their father. In the six months following the murder and before their arrest, the brothers proceeded to spend $1 million of their parents' money partying. If only these walls could talk...

Read more about the Menendez murders.

The murder of the 6-year-old pageant queen in her Boulder, Colorado, home is one of the country's most infamous cold cases of all time; the story resurfaces every few years in the news. To this day, we don't know exactly what went on in that house—but theories abound.

Because of its grand size and old age, this mansion in the French Quarter is a New Orleans landmark. But the LaLaurie House has a seriously dark history. It was once owned by wealthy socialite (and one of history's deadliest serial killers) Madame Marie Delphine LaLaurie, who allegedly tortured and killed her slaves. When a fire broke out, neighbors burst into the house to help and discovered a grisly scene. LaLaurie avoided being caught and punished, though, reportedly fleeing to Paris. Now, the corner building is a stop on the Haunted History Tours in the French Quarter.

On an otherwise sleepy street in the tiny town of Villisca, Iowa, sits an old white house with an alarming past. On June 10, 1912, someone killed Josiah Moore, his entire family, and two guests—and was never caught. Now, you can tour and stay overnight in the Villisca Ax Murder House. Guests have reported hearing, seeing, or feeling strange things under the roof.

The 1796 mansion is known to many as the South's most haunted plantation. Legend has it that a slave named Chloe was hanged for poisoning the plantation owner Judge Clark Woodruff's daughters. Now, it's a bed and breakfast that's open for tours and special events. But that hasn't stopped the hauntings. Chloe has supposedly been spotted around the property, as has the figure of a little girl. Frances Kermeen, who owned the house for more than a decade, even wrote a book about her many eerie encounters in 2005, titled The Myrtles Plantation: The True Story of America's Most Haunted House.

Sarah Winchester was the heiress to a gun empire, but it's said that she feared she was being haunted by the spirits of those killed by her family's famous rifles. So, supposedly to appease the ghosts, she ordered continuous construction and expansion on the farmhouse-turned-mansion in San Jose, California, from 1822 until her death in 1922. At one point, the Winchester Mystery House was the largest private residence in the United States. Now, it's a National Landmark that's available for tours, the subject of an upcoming film starring Helen Mirren, and according to some, still haunted.

The Joshua Ward House at 148 Washington Street is a Federal style brick home that sits upon the land once belonging to Sheriff George “The Strangler” Corwin. Corwin was the High Sheriff of Essex County, Massachusetts, during the Salem Witch Trials. He was known to strangle the accused by an old English method of “tying neck and heels” in which the victims’ bodies were forced into hoops, necks roped to feet until blood gushed out of their nose and mouth. Well hated, Corwin carried out the arrests of the accused and the executions at the gallows of those condemned during the trials. Corwin also pressed to death with rocks Giles Corey, an 80-year-old farmer, who refused to stand trial for witchcraft. Corey’s last words were “Damn you Sheriff I curse you and Salem!” Four years later, at age 30, Corwin had a fatal heart attack and died. His family, fearing his body would be dismembered by an unruly crowd, interned his body in the cellar. They also did so because Phillip English, a wealthy merchant who was arrested by Corwin in 1692 tried to put a lien on his corpse until he was reimbursed for the damages suffered at the hands of Corwin during his imprisonment. Today, the house is a recently opened Bed and Breakfast called “The Merchant” and notably one of the most haunted houses in New England with many claims of ghostly encounters. #joshuawardhouse #salemma #hauntedhappenings #salemmassachusetts #ghosts #history

The Salem witch trials have marked the Massachusetts town. One of the creepiest residences is the Joshua Ward House, which stands on land once owned by Sheriff George Corwin. Corwin got his nickname "The Strangler" for the sadistic torture he would inflict on prisoners of the jail, where he also hanged several men and women. When he died, his family kept his body in the basement of the house for years to prevent it from mutilation by his enemies. The house that now stands in its place is said to be haunted by Corwin and the innocent lives he took.

Ohio's most haunted house is actually more of a castle. The stone structure in Cleveland is filled with tons of terrifying tales, including the mysterious deaths of multiple Tiedemann family members family members. There are also rumors of an axe murder, a mass Nazi shooting, and uncovered baby bones. Today, there's a "private property" sign on the outside.

Shot a wedding at this gorgeously creepy venue. Loved every second of it. The venue is stunning. But walking around in here alone is definitely creepy. 😂 #lempmansion #lemp #october #wedding #midwestweddingphotographer #stlphotographer #stlouisgram #fisheye #creatives #stlcreatives

The former St. Louis home of Lemp Brewery president William J. Lemp is now a restaurant and inn that can be toured or booked for private events. But be warned: If you host your wedding here, you might have an uninvited otherworldly guest or two. William shot himself in the mansion after one of his sons died of mysterious circumstances. Years later, William J. Lemp, Jr., also shot himself in the same building, and his son, William Lemp III, had a heart attack and died, too. William Jr.'s brother, Charles, lived in the house until his own suicide (also by gunshot wound).

Superstition and ghost sightings shrouded this beautiful New York Victorian when the occupants' family business burned to the ground during the Great Depression and they lost their fortune. But the Kreischer Mansion's creepiest moment wouldn't come till 2005, though, when a grisly mob killing took place inside the house.

This Fall River, Massachusetts, home continues to draw a crowd even 125 years after Lizzie Borden was acquitted of brutally murdering her father and stepmother with an axe in 1892. Now a bed and breakfast museum, the creepy house has been restored and redecorated with period pieces to match the crime scene photos (yikes). Some guests and paranormal investigators have claimed to detect spirits. Curious souls can take a tour, while the bravest bunch might book a room.

Check out our account of an overnight stay at the Lizzie Borden house.