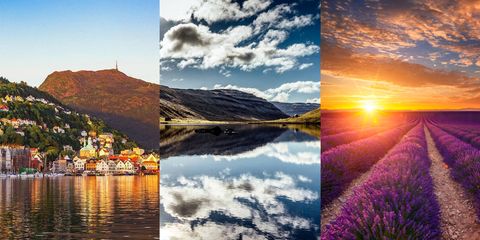 Tired of the tourist traps? Yeah, same. (Half the fun of traveling is *discovering* something, you know?) Here, 10 new "It" destinations to start exploring ASAP, before everyone else does.

Hi everyone! @wesinthewild here. I'm one of those lucky people who visited this mystical place. The Faroe Islands are fantastic! This week I'll tell you a bit more about my trip last April. #visitfaroeislands #faroeislands

While Iceland may very well be the hot (er, cold) destination of the moment, Denmark's Faroe Islands shouldn't be overlooked if you're visiting the area. Nestled between Iceland and Norway, smack in the middle of the North Atlantic Ocean, the remote group of 18 islands are best accessed from Copenhagen if you're looking to get away from the crowds.

The islands boast an unspoiled landscape for endless outdoor activities like hiking and bird watching (they're home to the Puffin and 305 other species!) so you'll have plenty of one-on-one time with nature. Make sure to fit in a tour to Vestmanna, the islands' famous bird cliffs and well worth the views. For more stunning sights, book a room at Gjáargarður Guesthouse in the village of Gjogv which overlooks a large gorge. And of course, get ready to try plenty of Nordic cuisine, which is filled with new twists on fish and lamb, making sure to stop by Restaurant Koks.

If you're a wino, Franciacorta is the place to spend your time this summer. The small region in Northern Italy, just outside of Milan, is home to over 100 wineries that exclusively produce the region's namesake sparkling wine created with the "champagne method," and George Clooney just happens to be a fan.

With vineyards situated in medieval castles and restored monasteries, the winery hopping is not only great for the palette, but it's also simply breathtaking. Plus, if you get tired of sipping glasses of Bellavista's Satèn or Contadi Castaldi's Rosé all day, take a break at a spa, like the aforementioned restored monastery's Cappuccini Resort.

And, don't miss out on a boat trip around Lake Iseo for breathtaking views of the villas and mountains. As for meals, you're in Italy so you can't exactly go wrong with pizza, pasta, and fresh mozzarella at every turn, but definitely stop by Laboratorio Lanzani for an innovative take on Italian classics.

Croatia has become a popular tourist destination as of late (we'll blame Game of Thrones for that one) but since it's rather large, most people visit Split, Hvar, and Dubrovnik and end up stopping there. If you're headed that way, make sure to add Brac Island to your list of must-sees.

An easy ferry ride from Split, Brac Island is actually home to the country's most famous beach, Zlatni Rat. Plus, since it is a boat trip away from the mainland, hotel stays tend to be cheaper and beaches along the island have fewer crowds–an instant plus in the midst of summer. While you're there, make sure to explore Skrip, the oldest settlement on the island, where you can see castle remains and ancient city walls. You can also swing through the Museum of Olive Oil (Brac is famous for their olives) and the Native Museum.

Located on the West coast of Norway, this super-Instagrammable town is full of cobblestone streets and colorful buildings to greet you. Take a ride up the Funicular to get a view of the entire city at sunset, and explore the Bergunhus Castle's grounds to learn more about the city's history.

If you're a seafood lover, explore the open market situated right in front of the town's seaport, with an expanded version with fresh cheese, bread, and Norwegian delicacies on the weekends. If you're brave, try a reindeer dog—the Norwegians are famous for their hot dogs (and their toppings!) and the dogs at Trekrokeren won't disappoint. If you're a coffee enthusiast, make sure to stop for a cup in a local shop—coffee is also a specialty of theirs.

Considering the fact that Ireland's weather is often unpredictable, it doesn't really have an off-season, making summer as good a time as any to visit. The west coast's breathtaking terrain is perfect for those who are adventurous enough to rent a car and explore—expect to discover sandy beaches, rolling green hills, and friendly Irish folk at every turn.

The easiest starting point is Galway (accessible from Dublin), where you can then head to towns like Cong and Murrisk for more sightseeing. Make sure to stop by the Ashford Castle (which has since been turned into a luxury hotel) as well as Doolough Valley, a landmark from the Great Famine. There will be plenty of gorgeous views (and horse sightings!) along the way, so build in time to your travel itinerary for stops as you'll be pulling your car over the entire way.

Just off the coast of British Columbia, this hidden gem is about as hard to travel to as Bali for most—but is well worth the trek. Formerly known as the Queen Charlotte Islands, Haida Gwaii is more commonly known as "Canada's Galapagos" due to its abundance of wildlife. The islands are the home of the Haida First Nation, who are world-renowned for their totem poles and monumental art forms.

In terms of what to do day-to-day, there isn't much—and that's the beauty of it. Days can be spent lounging by the water, swimming in the surf, whale watching and even fishing. Make sure to do a kayak tour or boat tour during your stay, as well as a tour of the abandoned Haida village sites.

While many of us have Paris or Cannes on our bucket list when it comes to France, the southeastern region of Provence is a must for a quaint, picturesque retreat. Filled with lavender fields and olive trees for miles on end, the region is well-known for their friendly people, fabulous food and drink, and quiet towns.

Not surprisingly, much of the countryside has inspired artists like Paul Cézanne (who was a native of the area) and Picasso, and the towns are a mecca for gothic-style architecture buffs and antiquing addicts. While there, pay a visit to the lavender fields for the once-in-a-lifetime views, and stroll through an olive oil farm for a tasting. You of course won't go hungry here, as almost all ingredients are fresh from neighboring farms and utterly delectable.

If you'd rather live it up Miami-style, head over to Punta del Este in Uruguay, known for its sprawling beaches and roaring nightlife. Brazilians have been vacationing in this spot for years, but it's just now starting to become a destination for Europeans and Americans alike.

Make sure to check out La Barra (it's hard to miss) as it's the trendiest neighborhood and you'll be able to choose from your stretch of beach populated by surfers or sun-tanners. If you need a break from the beach, browse the local shops selling handmade baskets, textiles and jewelry before heading to Casa Pueblo, a museum (in a castle!) that showcases the work of Uruguayan artist (known as their own Picasso) Carlos Páez Vilaró.

Instead of booking the always-crowded Mykonos or Santorini for your trip, take the road less traveled and head to Folegandros, for a more authentic look at Greek life. Full of traditional Greek architecture and breathtaking views, the island is packed with quiet beaches and authentic cafes.

Make sure to visit Agali and Ambeli, two of the best beaches on the island, as well as the town of Kastro, which is the oldest community on the island and has a mix of traditional whitewashed buildings and medieval ruins. For fabulous views of the island (and minutes from Chora, the largest town) stay at Hotel Kallisti, and dine at Zefiros nearby to try the local cuisine.

You can find something for everyone on The Canary Islands—whether you like to stay active on your vacation, or become one with the beach. Surrounded by volcanoes, sand dunes and even lush forests, the islands offer up a variety of activities like camel rides, windsurfing, scuba diving to shipwrecks and more.

On Tenerife, arguably the most popular of the islands, there are even lava "fields" that you can hike through. Before you leave, make sure to go through the Cueva de los Verdes, a lava tunnel that formed from eruption activity from La Corona Volcano, running all the way to the ocean.

This content is created and maintained by a third party, and imported onto this page to help users provide their email addresses. You may be able to find more information about this and similar content at piano.io
Advertisement - Continue Reading Below
More From Travel
Add St. Lucia to Your Post-COVID Bucket List
What to Buy From Away's Second-Ever Sale
Advertisement - Continue Reading Below
Explore the Luxe Private Island of Cayo Espanto
Andros Is the Most Underrated Spot in the Bahamas
The Most Covetable Weekender Bags Out There
Intl. Resorts That Offer On-Site COVID-19 Testing
Magical Ski Destinations for a Safe Winter Getaway
No Clue Where to Go in Turks & Caicos? Start Here
I'm Afraid to Travel by Myself in My Own Country
Over Cabo? Head to Punta de Mita, Mexico, Instead