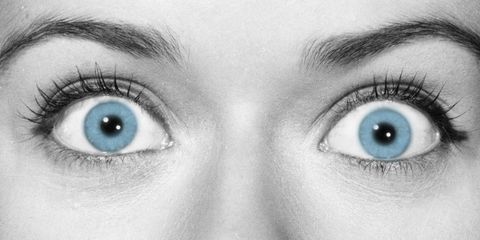 This is totally the kind of thing sci-fi writers imagined would happen in the year 2015: A new, non-invasive treatment out of California-based company Strōma Medical is using melanin-targeting laser technology to break down pigment on the outer layers of brown irises for permanently blue eyes. "The fundamental principle is that under every brown eye is a blue eye," explained Gregg Homer, one of the doctors testing the laser, to CNN. "The only difference between a brown eye and a blue eye is a very thin layer of pigment on the surface. Take that pigment away, then the light can enter the stroma and when the light scatters, it only reflects back the shortest wavelengths and that's the blue end of the spectrum."

According to Strōma's website, the procedure, which isn't yet FDA-approved, only takes about 20 seconds and reveals the full color change within four weeks.

But how safe is it? We asked plastic surgeon Dr. David Alessi and dermatologist Dr. Julia Tzu to take a look at the laser. "The Stroma procedure is an innovative way of removing brown pigment in brown eyes which makes them blue. However, not enough studies on the long term effect of the laser has been undertaken. Once it clears the FDA, then that would indicate that major safety concerns have been addressed. Glaucoma and cataracts are a consideration with such treatment. The company may be right in assuming that it will not do harm because of the low energy used but, when it comes to one's eyesight, there is no room for assumptions," said Alessi.

Tzu agrees, saying that "there have been some concerns raised regarding pigmentary glaucoma, which is a disorder of increased pressure within the eye. The company states that their human subjects thus far have not shown any signs of elevated intraocular pressure and that the mechanism by which the pigment is removed should not cause pigmentary glaucoma, but in general, larger numbers of patients are needed for any clinical trial to prove safety. In the U.S., the FDA will require much more data for the device to be approved here."

For now, maybe just go with what your mama gave ya?

I Had Snail Slime Needled into My Face

The New Way to Use Hot Rollers

Alexandra Tunell Senior Beauty Editor Alexandra Tunell is the Senior Digital Beauty Editor at Harper's BAZAAR, where she writes beauty features and covers industry news, health, fitness and wellness trends.
This content is created and maintained by a third party, and imported onto this page to help users provide their email addresses. You may be able to find more information about this and similar content at piano.io
Advertisement - Continue Reading Below
More From Beauty
The Best Editor-Approved Lip Scrubs
FOREO's Game-Changing Brush is on Major Sale
Advertisement - Continue Reading Below
Revlon's Cult-Favorite Brush is on Major Sale
Your New Favorite Retinol Is Made From Caviar
24 Hours With Diipa Büller-Khosla
Give Your Curls the Gift of a Diffuser
Meet Your New Hero Ingredient: Niacinamide
This PMD Device Is on Super Sale on Amazon
Yes, You Should Be Using a Jade Roller
This Affordable Razor Promises Smoother Shaves