Any mention of the word "blonde" and you probably think pretty quickly of classic movie Legally Blonde and, in turn, Reese Witherspoon. The hair color has become a huge part of her identity in Hollywood ever since Elle Woods made her mark back in 2001. But this week, the actress appears to have done the unthinkable, and stepped out with a dramatic brunette hair transformation that leaves her almost unrecognizable.

Witherspoon was pictured on the L.A. set of her current project, Apple streaming series The Morning Show, where she revealed a fall-ready makeover with long, chestnut brown hair in loose waves. Looking entirely ready for the season, the Big Little Lies star was also wearing blue jeans, dark brown knee-high boots, and a Burgundy leather jacket.

Sure, she may have bitten the bullet and gone for a bold hair change, but it might be safer to assume that her new look is courtesy of a really good wig.

Over on her Instagram stories, Witherspoon shared a series of videos promoting her book club in which she was sporting her signature light blonde look. 24 hours earlier, she was also wearing longer, auburn locks as part of her Halloween costume, just to really make sure we’re all as confused as possible.

Happy Halloween, everyone! 🎃 Have a Spooky night! 🧡🖤🧡

In the past, the 42-year-old actress has been committed enough to her acting roles that she’s taken the plunge and dyed her hair darker to suit the character. Her parts in The Good Lie and Walk The Line both saw her wearing brown hair, so it’s entirely possible that she’s done the same again.

Real dye job or not, we can probably all agree that Reese looks just as amazing with brunette hair. Maybe it’s time for Legally Brunette? 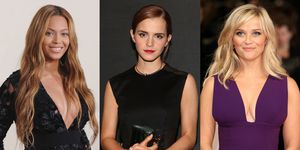 19 Celebrities Get Real About the Gender Wage Gap
Lucy Wood Contributor Lucy Wood spends most of her time writing about celebby things, reading books, and waiting for the glorious day that she have enough millions for a pet sloth.
Advertisement - Continue Reading Below
More From Beauty
Hailey Bieber's Beauty Routine Is So Simple
Facts to Know Before You Get a Keratin Treatment
Advertisement - Continue Reading Below
The 3 Lipsticks I Have In Rotation Right Now
Why Using a Product With Peptides Is Worth It
Created for From Marie Claire for Created by Marie Claire for
StriVectin Peptight
Line Edit: Eyeliner Trends That Are High Drama
Black-Owned Beauty Brands You Need to Know
The Body Lotion Your Dry Skin Has Been Craving
Know the Signs That Your Makeup Has Expired
Kendall Jenner Has Rapunzel Hair On 'Garage' Cover
WORTH IT: Royal Fern Skin Perfecting Essence