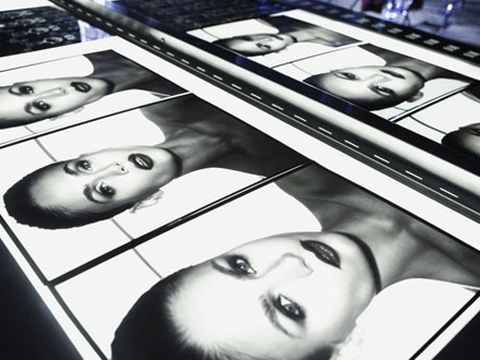 Back in the '90s, blasting wrinkles meant horror-flick-like oozing and months of redness as "ablative" lasers burned off the skin's surface and a younger-looking version grew in.

Not so with the new generation of smarter lasers, which target the hallmarks of aging—creases, brown spots, broken capillaries, sagginess—without destroying the skin you've got. The result? Faster healing, so you can get back in makeup and return to work with smoother skin in as little as 24 hours. Still, any searing laser beam has the potential to scar or damage pigment (especially for women of color), so treatments are best left to an M.D., who can adjust the intensity to work with your skin tone. And sun-worshippers beware: Because many lasers target pigment, give the beach a four- to six-week break before your first session. Here, a laser-by-laser guide to the treatments that'll suit your trouble spots, budget, and schedule.

WHAT IT'S FOR: Smoothing fine-to-moderate lines, evening out brown spots, and improving overall glow with quick weekend recovery. (It's often referred to as "Fraxel," the brand that debuted the device in 2004.)

HOW IT WORKS: Heat generated by the laser penetrates deep into the skin and stimulates collagen production without annihilating your epidermis (translation: no oozing or rawness). It's typically performed over a course of three to five 25-minute treatments, one to two months apart, under topical anesthesia. And it's safer for ethnic skin types than ablative lasers, but even women as light in tone as Lucy Liu should proceed with extra caution (your doctor can calibrate the laser at a lower intensity to minimize risks, but you may need extra sessions).

HOW IT FEELS: Less painful than ablative procedures, these treatments give the sensation of heat rather than pins and needles. Feels like a bad sunburn for about 10 minutes post-procedure; afterward, skin is pink and sandpapery for three to five days but can be camouflaged with concealer.

WHAT IT'S FOR: Smoothing fine-to-deep lines and evening out brown spots in a single treatment. Can also help tighten lax skin and carpet bomb broken capillaries if they fall in the laser's direct path.

HOW IT WORKS: The laser beam strikes the skin in thousands of places, destroying tissue a millimeter deep in those microscopic spots only (think perforated paper). Surrounding skin remains intact, allowing for faster recovery than the original ablative devices but more intense results than the nonablative fractional laser. The hole-punching fires up the body's wound-healing response, which generates collagen and smooths wrinkles. It's ablative and therefore riskier for women of color, but can be executed successfully at a doctor's discretion.

HOW IT FEELS: Generally performed with local anesthesia similar to what you'd get in a dentist's office. After 15 minutes of post-treatment discomfort and an application of ice packs, pain is minimal. For 24 to 36 hours, skin oozes and bleeds (just as pretty as it sounds), followed by five days of crustiness. Once crust peels, new, pink skin emerges and makeup can be worn; complete healing within two weeks. (FYI, this laser comes in three varieties: CO2, Erbium, and YSGG. CO2 is harshest, while YSGG offers the quickest, easiest recovery.)

WHAT IT'S FOR: Still the most aggressive fix for hard-core lines and acne scars; can also tighten loose skin but is safe only for fair skin types (olive tones and women of color risk permanent pigment loss).

HOW IT WORKS: By blasting away the skin's top layer, this aggressive single treatment bulldozes wrinkles.

HOW IT FEELS: During, like needles across the face (it's sometimes performed under general anesthesia). Recovery-wise, think burn victim on day one as open wounds ooze and bleed, followed by five to 10 days of rawness while your obliterated epidermis regenerates (sorry, no makeup for up to two weeks). Overall pinkness persists for two to four months.

WHAT IT'S FOR: Eliminating brown spots and other sun-induced discoloration and spot-treating broken capillaries. When performed with nonablative fractional treatments, can amplify skin-tone-evening benefits--but it has no effect on wrinkles.

HOW IT WORKS: While not a "laser" per se, IPL devices work similarly. Short pulses of bright white light pinpoint brown pigment cells and redness, which are damaged when they absorb the light and the heat it creates. Safe for most skin types, but a doctor may dial down intensity for darker skin tones to avoid slim risk of de-pigmentation.

HOW IT FEELS: Sunburn-like. Patients experience slight swelling and pinkness the day of the procedure, but there's no downtime, which is why it's often categorized as a "lunchtime" treatment.

This content is created and maintained by a third party, and imported onto this page to help users provide their email addresses. You may be able to find more information about this and similar content at piano.io
Advertisement - Continue Reading Below
More From Beauty
Soothe Your Dry Palms with These Luxe Hand Creams
Sephora Collection Just Launched a New Foundation
Advertisement - Continue Reading Below
Keratin Treatments You Can Do At Home
How Marie Kondo Does Self-Care
Kick Off 2021 With A New Fragrance
Layered Haircuts For Every Face Shape
The Anti-Aging Products Derms Recommend
Behind the Scenes With Bridgerton's Wig Team
The Best Editor-Approved Blushes
Once You Wax At Home, You Might Never Go Back