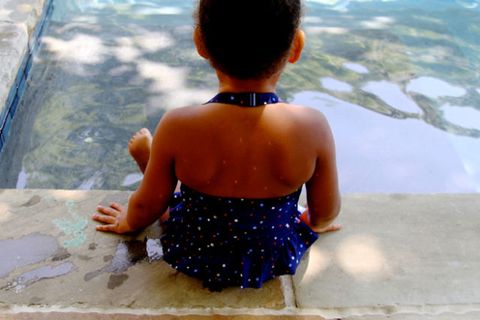 IT'S HERE. Sure, there aren't half as many butts as the "Anaconda" video (spoiler alert: there are, in fact, no butts) and it doesn't have the same angsty black and white feel as the original, but the video for Beyoncé and Nicki Minaj's "Flawless" remix is still fantastic. Yes, it's the footage shot at the On the Run tour in Paris when Nicki Minaj joined Bey onstage, which everyone anyone who watched the HBO special has seen...which feels like sort of a cop out. Couldn't they have done some glorious, highly produced, secret-reveal style video extravaganza? But perhaps we should be happy that Bey is giving us this little treat at all. And it's fantastic, so whatever. Plus, you can now watch Beyoncé's face as she delivers that epic elevator line.

Sally Holmes Digital Director Sally is the Digital Director of MarieClaire.com where she oversees coverage of all the things the Marie Claire reader wants to know about, including politics, beauty, fashion, celebs, and Prince Harry's facial hair.
Advertisement - Continue Reading Below
More From Celebrity
Kate and Meghan Are Glowing In Massimo Dutti
The Jonas Brothers Remade a Scene from 'Camp Rock'
Advertisement - Continue Reading Below
Harry Doesn't Want 'The Crown' to Cover His Life
Meghan's Emotional Visit to a London Dog Shelter
Taylor Swift's Mom, Andrea, Has a Brain Tumor
Kate Wore a Great Chevron Blouse to UK Event
Brad Pitt and Jennifer Aniston's Pics, Analyzed
58 Celebrities Who Hated Their Roles
Prince Harry Grins as He Returns to Canada
Meghan Markle Went on a Hike With Archie