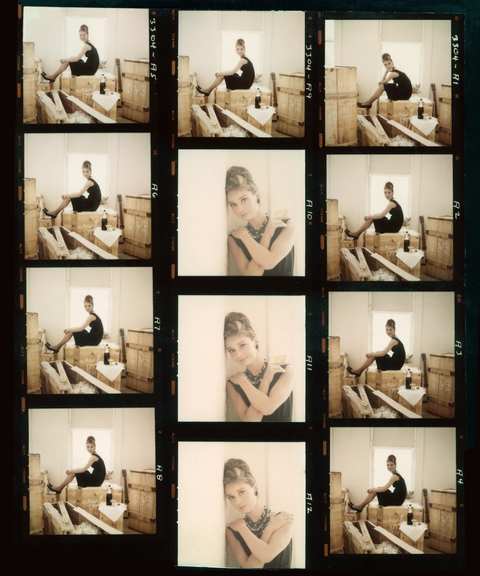 "Most of Hollywood history has survived because someone dug it out of the trash," photographer Bruce McBroom says in the new book Hollywood Frame by Frame. And it's those unearthed, pulled-from-the-trash items that seem to hold the most intrigue.

For years, studios relied on elaborate, staged portraits of their movie stars for publicity photographs, but, beginning in the 1950s, they started shooting more candid, behind-the-scenes photos that they would sell to outlets. The photos were quickly printed up as contact sheets, allowing movie houses and celebrities to choose which pictures they wanted released.

Hollywood Frame by Frame: The Unseen Silver Screen in Contact Sheets, 1951-1997, by author and film historian Karina Longworth, takes a look at both the seemingly throwaway moments and the chosen images. "Given the great artificiality of moviemaking," Longworth writes, "it's all the more remarkable to see the moments of spontaneity or misstep that are often visible in the outtakes, right alongside images deemed supportive of the facade, and thus commercially useful."

She continues: "Contact sheets show aspects of moviemaking that someone—a star, a producer, a publicity department, a photographer, a photo editor—didn't want us to see."

The book includes outtakes and selected stills from some of Hollywood's most famous films, including Raging Bull, Rear Window, and Breakfast at Tiffany's.

Elizabeth Griffin Strategic Visual Content Editor for Hearst Digital Media, Photo Editor of Esquire.com, and staff photographer at Hearst.
This content is created and maintained by a third party, and imported onto this page to help users provide their email addresses. You may be able to find more information about this and similar content at piano.io
Advertisement - Continue Reading Below
More From Celebrity
J.Lo Made Out With Ben on IG for Her 52nd Birthday
Are Will & Kate Sending a Message to Harry & Meg?
Advertisement - Continue Reading Below
Harry and Meghan Reportedly Have a Four-Book Deal
Naomi Osaka Lit the Olympic Cauldron in Tokyo
John Legend Performed "Imagine" for the Olympics
Simone Biles Is Honored With Her Own GOAT Emoji
Kate Winslet Reveals Her Favorite Red Carpet Look
Margot Robbie Had a Life-Size Cutout of John Cena
Jennifer Lopez and Ben Affleck Are IG Official
Celebs Share Their Emotional Infertility Stories