Today's Top Stories
1
Celebs Join the #MyNameIs Movement on Twitter
2
Nicole Kidman, Hugh Grant, and 1 Cheeky Zoom Call
3
Marie Claire's Guide to the 2020 Election
4
The Trending Colors on the Spring '21 Runways
5
An Expert on How to Wear Eye Makeup Behind Glasses
Getty Images

Singer/songwriter John Mayer, person who loves skincare more than you, is celebrating a sobriety milestone—so congratulations and support are definitely in order. Mayer has said in the past that "drinking is a f*cking con," and apparently hasn't touched alcohol for a year.

"One year ago today, I decided to give drinking a break," he tweeted. "A very personal thing for everyone. For me, a constant return on investment...I post this because I want people to know that ‘that’s enough for now’ is on the menu, so to speak."

I post this because I want people to know that “that’s enough for now” is on the menu, so to speak.

Back in the summer, Mayer said he replaced drinking with smoking weed, telling Rolling Stone, "I put it where drinking used to go, and the quality of life has gone up considerably.... Drinking is a f–king con. How much is enough? Every time I drank, I was looking for some sort of regulated amount. It always feels wrong for me. I always feel like I went overboard. 'I said two, now it’s three, now we’re at four?'"

Mayer added that he "never had a serious issue with it," but felt like he needed to take a break: "There’s never an amount that felt like I was succeeding at life. It always felt wrong." 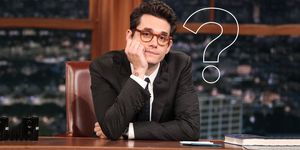 Eternal Question: Who Is John Mayer?
Mehera Bonner Contributor Mehera Bonner is a news writer who focuses on celebrities and royals—follow her on Instagram.
This content is created and maintained by a third party, and imported onto this page to help users provide their email addresses. You may be able to find more information about this and similar content at piano.io
Advertisement - Continue Reading Below
More From Celebrity
Ashley Graham Celebrates Body With Nude Photo
Gigi Hadid's Baby Is Already Wearing Moschino
Advertisement - Continue Reading Below
Adele Is Hosting 'SNL' in a "Full Circle" Moment
Harry Pranked the Queen by Changing Her Voicemail
Celebs Join the #MyNameIs Movement on Twitter
The Queen Laid Down the Law at the Royal Wedding
Why Meghan Might Stop Talking About Social Issues
Jennifer Lopez Rocks Activewear by the Pool
Diana Compared Royal Life to Wedding Day Stress
The Queen Made Prince Philip Quit Smoking