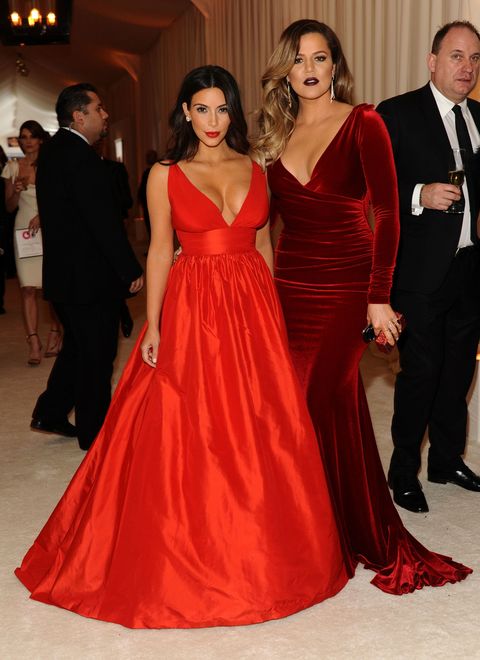 Update, 9/18: In a new clip from this weekend's KUWTK, Kim tells Khloé "the Sassy One" Kardashian that she's finally pregnant, releasing a tsunami of emotion and good-natured whale jokes. Can we get a GIF of Khloé's face when she finds out North was the first to know? NVM. On it.

Update, 8/10: We can all calm down now (and strike out another directional name): Easton is not happening, a rep for Kim and Kanye told Page Six.

Update, 8/7: Though the second of the West-Kardashian clan will not be named South West, it appears that there might very well be a directional quality to the name. If you remember, a collaboration between Kanye West and American Psycho writer Brett Easton Ellis was in the cards—but has yet to be revealed. Turns out, we might be getting an even bigger collab...that's right. EASTON. EASTON WEST.

"Easton is the chosen name. It's confirmed that the baby boy will be called Easton," a close-yet-obviously-unnamed family friend told the UK Daily Mail. (Did you get that? They said it TWICE so it must be true.)

Which, okay. Sure. They're going in a different direction. (Heh.) BUT!—Kim! Kanye!—hear us out. It's totally not too late to change your minds. Just rethink South for a little while longer, it might grow on you.

Side note: If you say the name fast enough, it sounds like "East and West." Which is kind of cool, maybe? I don't know anymore. I'm sorry.

Update 2, 6/15: Kim Kardashian does not appreciate your weak baby-naming attempts, and she wishes you would just stop.

In an interview on NPR's Wait Wait...Don't Tell Me!, Pregnant KiKi told host Mike Pesca she doesn't like South West as a name at all, insulting the entire internet in the process. "I think it's so stupid," the expectant mother said. "I don't like South West. North will always be better." Then, to make sure the bridge was charred beyond repair, she called the well-intentioned suggestion the "stupidest thing ever and just ridiculous."

Oh. Okay. *tears up list and sets the pieces on fire*

Update 2, 6/10: Even though her misinformation-dismantling livestream isn't up yet, Pregnant KiKi does not play.

so many rumors...we are not having twins, yes I am carrying my own baby lol & we have not told anyone the sex of our baby yet!

Ah, well. At least the odds have now been upped to 50 percent.

Update, 6/10: With multiple sources confirming the news, Us Weekly has reported that Kim Kardashian is pregnant with a boy/second Olivier Rousteing muse.

"Kanye loves Nori more than anything, but to make his world complete he wanted a little boy, an heir," says a Kimye confidant who doesn't seem to be aware women can inherit money and talent and whatever just as well as men can. "He's overjoyed!"

FYI, Kim's happy too because this combination of children is exactly what she's always wanted. Congratulations, everybody.

Update, 6/10: With multiple sources confirming the news, Us Weekly has reported that Kim Kardashian is pregnant with a boy/second Olivier Rousteing muse.

"Kanye loves Nori more than anything, but to make his world complete he wanted a little boy, an heir," says a Kimye confidant who doesn't seem to be aware women can inherit money and talent and whatever just as well as men can. "He's overjoyed!"

FYI, Kim's happy too because this combination of children is exactly what she's always wanted. Congratulations, everybody.

Update, 6/5: After Kim Kardashian announced her second pregnancy last week, the internet immediately offered up an airline/direction as the obvious choice. But, according to TMZ, contrarian parents Kim and Kanye have given up on the navigation and K themes and are instead opting for something a bit more sentimental: names linked to their late parents Robert Kardashian and Donda West. Keep in mind that if Kim really *is* pregnant with twins, both could eventually come into play, making North the odd kid out. (Until they have a fourth and call him/her Prime Meridian.)

Update, 6/3: Two Christmases ago, Kanye got Kim a Birkin hand-painted with grotesque naked ladies. This year, he might not need to get her anything (else) at all, if E!'s secret source is to be believed.

Update 2, 6/2: One of those anonymous but super-embedded-in-a-celebrity's-social-circle sources has spoken (yet again), and this time, he/she says Kim Kardashian is pregnant with twins. *side-eye*

Speaking with the New York Daily News, the source says Kim has had in vitro and that two eggs were fertilized. "She is waiting to see if they both 'stick' before she makes any kind of announcement. She has to wait and see if they are both okay. And she is waiting to get an okay from her doctor that both the fertilized eggs are healthy."

A different *insider* also told the NYDN that Kim, not wanting to steal Caitlyn Jenner's thunder, will wait to break the news sometime after the entire family makes an outing in New York. And that, friends, is the least believable part of this whole thing. Which is saying a lot.

Update, 6/2: Bespoke Proenza Schouler is the most effective puke suppressant, it would seem.

According to Us Weekly, Kim Kardashian, who is pregnant with her second child, has been confined to her bed with terrible nausea but managed to drag herself to Monday evening's CFDA Awards. "To be honest, I've had really bad morning sickness, day sickness, night sickness—I can barely get out of bed," she said. "It's a very different type of pregnancy from my first one, but I'm so grateful to be pregnant when we didn't even think it was going to happen for us [so] I don't care how sick I am."

Courage, brave Kimmy. With more custom clothes and the task of furnishing your baby's nursery, you shall surely overcome.

Original post 5/31: After watching her struggle for months to conceive a second child, we got some incredible news tonight on the mid-season finale of Keeping Up with the Kardashians: Kim Kardashian West is pregnant!

She and husband Kanye West are expecting another baby, which means we have a zillion adorable new instas to look forward to—and that North West is going to get a run for her street-style-dominating money.

Congrats to the happy family!