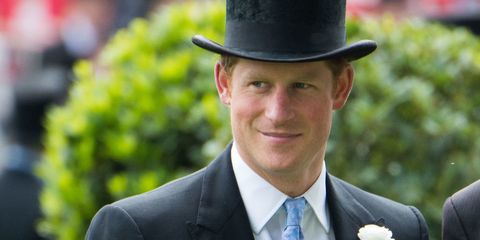 Update, 9/18: In addition to the whole saving-endangered-species thing and, you know, being royalty, Prince Harry now has something else going for him: a full ginger chin-sweater, which made its official entrée into society Thursday evening.

Not bad. Although, out of the two most important women in his life, probably only Chelsy Davy is into it.

Original story, 8/12: Last week, Prince Harry—in a bid to up his bae status or just take it easy during his royal tour of Africa—debuted a full beard. He and his ginger scruff posed alongside workers and rhinos at the African Conservation Experience in Nelspruit, South Africa.

Look at it: so full and free!

The move is controversial: Not only are whiskers themselves divisive, but Prince Harry has done the beard thing before, sporting sizable scruff in December 2013. The facial hair was reportedly hated by Queen Elizabeth, and when the Queen isn't pleased, the look goes (see also: Kate's wedge heels and short skirts).

But given that Grandma is a good 8,123 miles away, she can't stop him and his beard for now.

This content is created and maintained by a third party, and imported onto this page to help users provide their email addresses. You may be able to find more information about this and similar content at piano.io
Advertisement - Continue Reading Below
More From Celebrity
Mandy Moore Calls Breast Pump Emmy's MVP Accessory
Royal Nanny to Get Damages from Interview Scandal
Advertisement - Continue Reading Below
Prince William and Kate Will Focus on Work in 2022
Kate Middleton Shares Prince Louis's First Words
Prince Charles Shares Final Exchange With Philip
William and Kate's Children Just Love Airplanes
Jennifer Aniston Answered Bizarre Fan Questions
Prince Charles "Really Wants to Meet" Lilibet
Britney Spears Deleted Her Instagram Account
Megan Fox Won't Be Told "What a Woman Should Be"