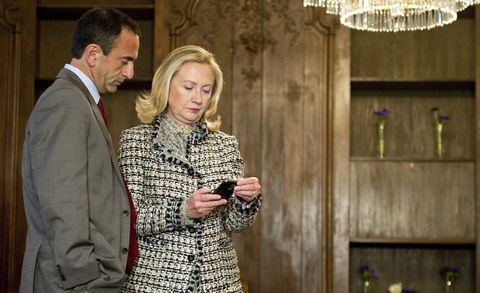 Hip to how the kids like to communicate these days, Hillary Clinton undertook a new initiative to reach millennial voters and your tech-savvy grandmother on Wednesday. The Democratic presidential candidate asked that they express themselves in a native tongue—emoji.

Answer in the comments! Under Hillary's college plan, every borrower can enroll in a program where they never have to pay more than 10 percent of their income per month to pay down their loans, with college debt forgiven after 20 years or 10 years for graduates that pursue careers in national service.

The overture—which the campaign rolled out on Twitter, Facebook, and Instagram because more is more on social media! Woohoo! The Internet!—was extended to promote the college affordability plan that Clinton announced earlier this week.

People were feeling all the feels.

Some shared sad faces and winged dollar bills and graduation caps. There were several poop emoji, which remain open to interpretation.

Others were less keen to participate in the exercise.

@HillaryClinton @JeffreyGuterman Great because I worked hard, paid it off, and now reap the benefits. Those who speak w emojis may disagree.

@HillaryClinton I paid mine off like a responsible adult. Is there an emoji for that?

@HillaryClinton who is doing your social media strategy? 📱 me. pic.twitter.com/ufwZRob0Pb

But for all the eye rolls and hand-wringing, TBH: The fact that even her detractors use fewer than 140 characters to criticize the stunt proves that Clinton knows where to have a conversation.

And how to have the last word.