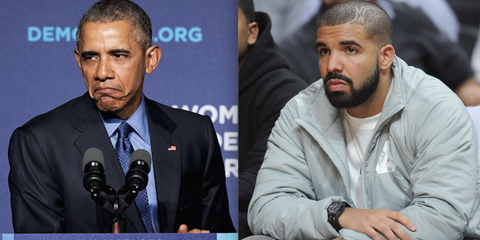 Barack Obama, a man unafraid to whip out a Grumpy Cat impression during a presidential speech, is also brave enough to publicly choose sides in the rivalry between Kendrick Lamar and Drake.

During a YouTube interview hosted by SWooZie on Friday, POTUS was asked who he thinks is currently winning the rap game: Drizzy or K. Dot. Shockingly, his hip hop allegiance doesn't lie with the lipstick-designing, pink sweats-wearing, dad-dancing man of our dreams.

"Gotta go with Kendrick," he admitted. "I think Drake is an outstanding entertainer, but Kendrick—his lyrics, his last album was outstanding. Best album, I think, of last year."

Skip to the 17:00 mark to to watch Obama answer the question  honestly: