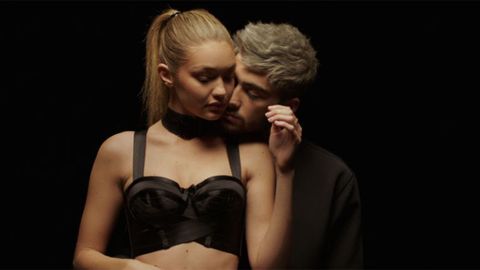 At exactly midnight last night, Gigi Hadid—rumored girlfriend, official "good friend" of Zayn Malik—made a surprise appearance in the music video for his first single "Pillowtalk." The two basically made out the entire time, which is one nice way to officially come out as a couple (or really expand the definition of "good friends"). As they publicly  discussed this morning:

But! Zayn's project isn't Gigi's first foray in her boyfriends' music. The model has a thing for dating musicians and getting involved with their videos. Below, a brief history:

Gigi Hadid and pop artist Cody Simpson were once a golden haired, teen dream couple of two years—though on-and-off at some points. "She is blessed for suuuure," Simpson said last April of Gigi's beauty. Those good looks—and Cody's love of them—were center stage in his video for "Surfboard," released in March 2014. The performance had less tongue than Gigi and Zayn's, but it was just as sultry:

Gigi really had the hair flip down.

Cody and Gigi broke up to focus on their careers in May 2015. A month later, G.I. Joe was born when Gigi and former boy bander Joe Jonas started spending a lot of time together. This culminated into Gigi directing the music video for "Cake by the Ocean," the first single of Joe's band DNCE. She had the idea for the video, Joe told People in October. "We were like f*ck it, you should do the video, and she just ran with it." She got a fitting call out in it:

"She had a megaphone. She was a badass. Everybody really looked up to her to lead and she really came through and showed us that she could do it."

Gigi and Joe came to an end in early November because it was reportedly "hard to make it work with their schedules." Then something crazy happened, days later. Gigi and former One Direction boy bander Zayn Malik were spotted together. And kept hanging together. "Sometimes life just happens," Gigi wrote on Twitter in a series of tweets she later deleted, seemingly in defense of their dating. "For whatever reason in whatever timing. And sometimes it doesn't make sense 'til it does. That's it." That relationship—the phone screensavers and PDA-y Instagrams—has culminated into this:

Smart thinking, right? Everyone knows it's a lot easier to create on-screen chemistry when it's real off-screen, too.