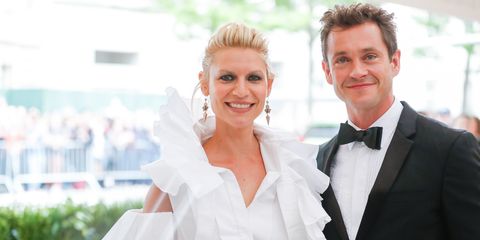 Claire Danes is expecting another baby. The actress announced the happy news during an interview on The Howard Stern Show on Sirius XM Wednesday morning that she and husband Hugh Dancy are expecting.

Danes and Dancy kept the news a secret for quite a while—E! Online reports that she's currently in her third trimester.

"I'm pregnant," she said during the interview. "I'm seriously preggo. I'm deep into my second trimester."

While she's finally shared the news of her pregnancy with the world, Danes is keeping the child's sex a secret. "I'm going to keep that to myself," she said when asked about it.

Danes and Dancy already have a child together, their five-year-old son Cyrus.

Kayleigh Roberts Contributor Kayleigh Roberts is the weekend editor at Marie Claire, covering celebrity and entertainment news, from actual royals like Kate Middleton and Meghan Markle to Hollywood royalty, like Katie Holmes and Chrissy Teigen.
Advertisement - Continue Reading Below
More From Celebrity
Prince Harry Spotted on a Grocery Run in Canada
Kanye West Leaves Kim Kardashian in an Elevator
Advertisement - Continue Reading Below
Channing Tatum Is "Happy" for Jenna Dewan
Inside Chrissy Teigen and John Legend’s Home
A Look at Royal Family Portraits Through the Years
Are The Weeknd's 'After Hours' Lyrics About Bella?
Kendall and Harry Had a Moment At the Brit Awards
Dwyane Wade on Getting Zaya's Pronouns Right
Harry Styles' Diana-Inspired Brit Awards Outfits
Jenna Dewan and Steve Kazee Are Engaged