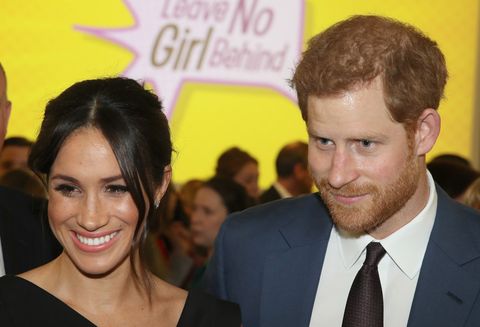 Prince Harry and Meghan Markle are exactly one month out from their highly-anticipated Windsor wedding—but they aren't letting last-minute wedding planning dominate their lives. The high-profile couple stepped out for a women's empowerment reception as part of the week's events for the Commonwealth Heads of Government Meeting.

#MeghanMarkle in a chic black dress (and, as always, foxy heels) for tonight’s Commonwealth reception pic.twitter.com/cjcdzyWugu

Prince Harry has been named president of the Queen's Commonwealth Trust and Commonwealth Youth Ambassador. During a speech about the program on Monday, he shared that his fiancée would be involved with the organization as well.

"I am also incredibly grateful that the woman I am about to marry, Meghan, will be joining me in this work, of which she, too, is hugely excited to take part in," he said.

Meghan made history when she stepped out with Harry at the Youth Forum earlier this week—it's unprecedented for a royal fiancée to take part in official royal engagements. Clearly, Meghan's future in-laws already think she's ready for the pressure though.

At the reception, Harry and Meghan met with representatives from charities and organizations whose work focuses on gender equality, particularly through girls' education. Some of the organizations that enjoyed meetings with the couple included the Malala Fund, Plan International, the Varkey Foundation, and Code Camp.

Women's issues are near and dear to Meghan's heart. Before becoming engaged to Prince Harry, she worked with a variety of charitable organizations that promote access to healthcare for women around the world. As a Global Ambassador for World Vision, Meghan traveled to India to meet with women impacted by the stigma attached to menstruation.

"I traveled to Delhi and Mumbai this January with World Vision to meet girls and women directly impacted by the stigmatization of menstrual health and to learn how it hinders girls’ education," she wrote in an article for TIME called 'How Periods Affect Potential.' "One hundred and thirteen million adolescent girls between the ages of 12–14 in India alone are at risk of dropping out of school because of the stigma surrounding menstrual health."