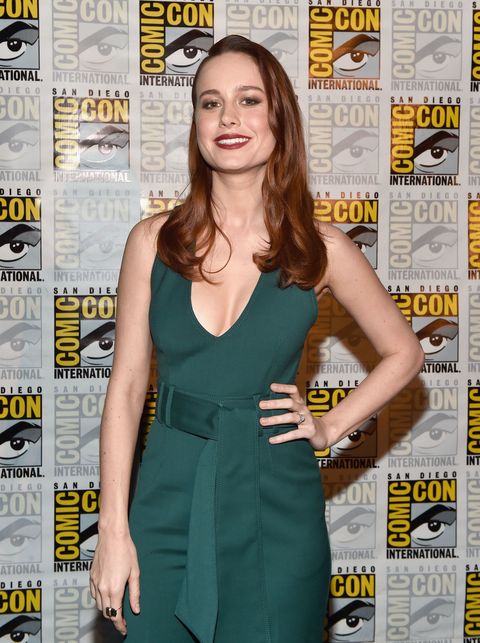 Okay, so this is pretty cool news.

Marvel has just announced that Brie Larson will play Captain Marvel - AKA Carol Danvers - in the 2019 film, Captain Marvel. This is a pretty huge deal, as when she arrived back in the 60s, the character was the first leading female superhero of the Marvel universe.

Marvel announced the news at this year's Comic-Con, with Brie Larson joining the marvel squad for their panel. She later shared a selfie wearing a Marvel cap, with the caption: "Call me Captain Marvel." OH, WE WILL, BRIE.

The film will finally act as an answer to all the desperate calls from fans for Marvel to hurry up and make more films that give the company's female characters justice. Black Widow STILL hasn't had her own movie and is frequently overlooked when it comes to making fan merch. It's high time that we had a new Marvel film that focused squarely on a woman. And in 2019, finally, we will.

For those not in the know, here's a quick recap on Captain Marvel. She's actually a very complex, interesting character who's been in Marvel comics for decades.

Ms Marvel then joined the Avengers for a bit, but left after things got dark - she was impregnated against her will while she was under mind control, and gave birth to a villain. She held some serious resentment against the Avengers for letting the whole thing happen.

Then more rubbish stuff happened. Ms Marvel had her powers and memories taken away by the X-Men's Rogue, she had to go through another transformation, and then she left earth behind to live in Space. When she returned, she developed a drinking problem and was generally in a pretty dark place.

But then things became a little better. Carol took on the role left behind by her old lover and swapped the Ms Marvel name for something jazzier: Captain Marvel. Captain Marvel then re-joined the Avengers and continued being a general badass.

Now, this is all in the comic book universe, so there's no knowing how much of this will be featured in the film. But either way, Captain Marvel is clearly a pretty meaty character. Brie Larson's going to nail it. We're excited.

Captain Marvel will be released in cinemas in March 2019.

Ellen Scott Hi!
This content is created and maintained by a third party, and imported onto this page to help users provide their email addresses. You may be able to find more information about this and similar content at piano.io
Advertisement - Continue Reading Below
More From Celebrity
J.Lo Made Out With Ben on IG for Her 52nd Birthday
Are Will & Kate Sending a Message to Harry & Meg?
Advertisement - Continue Reading Below
Harry and Meghan Reportedly Have a Four-Book Deal
Naomi Osaka Lit the Olympic Cauldron in Tokyo
John Legend Performed "Imagine" for the Olympics
Simone Biles Is Honored With Her Own GOAT Emoji
Kate Winslet Reveals Her Favorite Red Carpet Look
Margot Robbie Had a Life-Size Cutout of John Cena
Jennifer Lopez and Ben Affleck Are IG Official
Celebs Share Their Emotional Infertility Stories