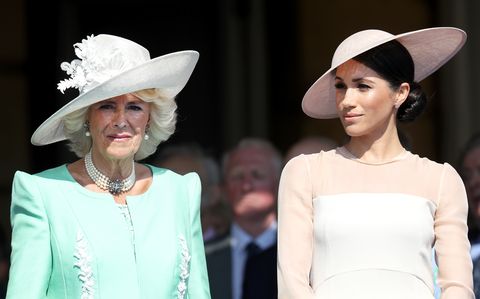 Being royal means following a lot of strict rules. Among the rules royals have to live by: No playing monopoly, no dark nail polish, and no garlic—at least not during official events.

The anti-garlic rule made headlines last month because the newest member of the royal family, Meghan Markle, is a self-declared foodie and, therefore, might have some trouble adhering to that particular rule. We held out hope for Meghan's sake that it was just a royal rumor, but alas. Now, Camilla Parker Bowles (aka the Duchess of Cornwall, aka Prince Charles' wife) has confirmed that the royal garlic ban is real.

During an appearance on MasterChef Australia, Camilla was asked about foods that are off the table (pun intended) at royal events.

"I hate to say this, but garlic. Garlic is a no-no," she said, according to AOL.

"So garlic is a no-no?" Gary Mehigan, one of the judges on the show, asked. "Because you’re talking, chatting?"

"Yes, exactly. So you always have to lay off the garlic," Camilla replied.

This is in line with the reasons that circulated when the story made the rounds in June.

Per Sunday Express: "Garlic is banned from being included in foods eaten by royal family members. With many meetings between official visitors, it is thought to be advised against to prevent any awkward bad breath."

What's more, Queen Elizabeth reportedly isn't a fan of garlic anyway, which means its ban will likely stay in place for the remainder of her reign, at the very least.

"We can never serve anything with garlic or too much onions," Darren McGrady, royal chef at Buckingham Palace, explained to RecipesPlus. "The Queen would never have garlic on the menu."

Kayleigh Roberts Contributor Kayleigh Roberts is the weekend editor at Marie Claire, covering celebrity and entertainment news, from actual royals like Kate Middleton and Meghan Markle to Hollywood royalty, like Katie Holmes and Chrissy Teigen.
This content is created and maintained by a third party, and imported onto this page to help users provide their email addresses. You may be able to find more information about this and similar content at piano.io
Advertisement - Continue Reading Below
More From The Ultimate Guide to the Royal Family
William Will Suffer "Worst" from Harry's Memoir
Harry's Friends Don't Want to Be in His Memoir
Advertisement - Continue Reading Below
Will & Kate's Modern Approach to Raising George
Why Harry's Memoir Release Date Has Upset People
The Royals Are Worried About Prince Harry's Memoir
Harry Is Putting the Queen in a Difficult Position
Are Will & Kate Sending a Message to Harry & Meg?
Harry and Meghan Reportedly Have a Four-Book Deal
Rare Photos From Diana and Charles' Wedding
Prince George Looks So Grown-Up in New Portrait