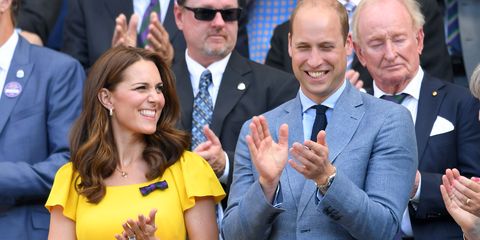 If you thought royals don't know how to party, think again. Kate Middleton and Prince William reportedly let loose for a night out in Mustique—the private Caribbean island where they're currently vacationing with their family.

The couple is on the trip with their three young kids—Prince George, Princess Charlotte, and Prince Louis—and Kate's parents, but it seems they were able to get away for a bit to enjoy some time to themselves.

The Duke and Duchess of Cambridge were spotted out for a party at Mustique's Basil Bar, which was also attended by Mick Jagger and his daughter Jade, sources told Hello!. The couple is friends with the bar's founder, Basil Charles.

The Cambridges arrived "on the early side" of the soirée sporting "island chic" outfits (William wore a shirt from a local brand), according to witnesses. "They were there for the cocktails segment and kept it rather classy," a source said.

The Duke and Duchess have been traveling to Mustique since 2008, Hello! reports, which was years before their wedding in 2011. This trip is their first time visiting the island as a family of five, as they just welcomed baby Prince Louis in April. They reportedly left for Mustique in mid-July after they were spotted at an airport in St. Lucia.

Nights out for William and Kate's might be rare (at least as far the public knows), but they also got their party fix in May after Prince Harry and Meghan Markle's wedding. At the private evening reception, William reportedly had a dance-off with his father and brother, and Kate got to dance with George Clooney.

The next morning, they were seen returning to Kensington Palace wearing big sunglasses—a true sign of a night well spent.

Erica Gonzales Erica Gonzales is the Senior Culture Editor at ELLE.com, where she oversees coverage on TV, movies, music, books, and more.
This content is created and maintained by a third party, and imported onto this page to help users provide their email addresses. You may be able to find more information about this and similar content at piano.io
Advertisement - Continue Reading Below
More From The Ultimate Guide to the Royal Family
Harry Carries Briefcase That Reads "Archie's Papa"
Meghan Markle and Prince Harry Arrive in NYC
Advertisement - Continue Reading Below
Princess Beatrice Has Given Birth to a Baby Girl
How Meghan & Harry Spent Their 2-Year Anniversary
Charlotte Has Two Major Milestones Coming Up
Kate Made a Very Common Shoe Shopping Mistake
The Queen Is Lawyering Up, Apparently
Harry & Meghan Are Still Close to the Queen, TYVM
Archie Inspired Harry and Meghan to Take a Stand
Harry & Meghan Had a Hard Time Leaving Royal Life