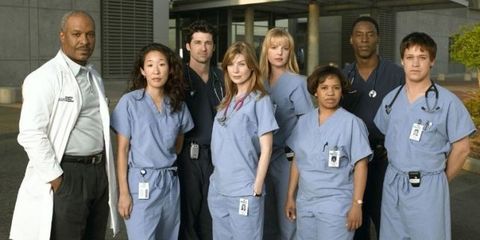 In the 11 years since Grey's Anatomy first debuted, the show's backstage scandals have often been as compelling and twist-filled as the on-screen storylines. And considering the high melodrama quotient at Seattle Grace/Grey Sloane Memorial Hospital, that's really saying something. Here's a definitive timeline of all the cast's messiest moments.

October 2006: Rumors begin to surface that Isaiah Washington, aka Dr. Preston Burke, used a homophobic slur toward co-star T.R. Knight during a backstage argument. Washington confirms the rumors by issuing an apology for his "unfortunate use of words during the recent incident on-set."

The whole situation was made more unpleasant by the fact that Knight had not yet publicly come out as gay when the scandal broke—he confirmed his sexuality shortly afterward.

January 2007: Knight confirms that being called the F-word by Washington pushed him to come out. "I've never been called that to my face," he tells Ellen DeGeneres. "When that happened, something shifted, and it became bigger than myself."

Washington confuses things further this month, denying that he ever used the slur against Knight—and using it again in the process. "No, I did not call T.R. [Knight] a faggot," he told reporters backstage at the Golden Globes. "Never happened, never happened."

Katherine Heigl called B.S. on Washington's statement immediately, slamming him for repeating the word itself: "I'm going to be really honest right now, he needs to just not speak in public. Period. I'm sorry, that did not need to be said. I'm not okay with it."

June 2007: Washington is officially fired from the show, following months of controversy and speculation. "I'm mad as hell and I'm not going to take it anymore," he said in a statement.

July 2007: Washington appears on Larry King Live to share his side of the story, claiming that he did use the F-word, but not in reference to Knight. Here's what actually went down, according to him: Washington told Patrick Dempsey to stop treating him like a "B-word," a "P-word," and an "F-word." He didn't mean the latter to be a gay slur, because to him the word just implied "somebody who is being weak."

Washington's departure from Grey's did make for one of the show's most memorably heartbreaking moments of all time, as Burke abruptly left a devastated Cristina at the altar.

June 2008: Heigl formally withdraws herself from Emmy consideration. This wouldn't be a huge deal in itself (although since she won an Emmy for her performance just a year earlier, it was always going to raise some eyebrows). The real news is the passive-aggressive statement she releases by way of explanation: "I did not feel that I was given the material this season to warrant an Emmy nomination and in an effort to maintain the integrity of the academy organization, I withdrew my name from contention."

Yikes. In response, Shonda Rhimes points out that Izzie had less to do in season four because Heigl had asked for a lighter work schedule, thanks to her movie commitments.

After Heigl called out the writers so publicly, most people are expecting Izzie to meet an abrupt end, Dr. Drake Ramoray-style. But Heigl does return for season five, under what you can only imagine are pretty awkward circumstances.

July 2009: T.R. Knight leaves the show after the conclusion of season five and later confirms that he was unhappy with his lack of screen time. Yup, there's a pattern emerging…

Following what Knight calls a "gradual breakdown of communication" between himself and Rhimes, he asked to leave the show. "My five-year experience proved to me that I could not trust any answer that was given [about George]," he tells EW. "And with respect, I'm going to leave it at that."

In the same interview, Knight claims that Rhimes tried to discourage him from coming out as gay following the Isaiah Washington incident. "I think she was concerned about having my statement come out so close to the [initial] event," he says, but Rhimes firmly denies this.

"I said, 'If you want to come out, that's awesome. We'll totally support that,'" she tells EW, going on to say that she had specifically told Knight that his coming out wouldn't affect George's storylines. "He was concerned that he was going to come out and George would suddenly be gay," she recalls. "I was like, 'We are not going to do that.' The idea that a gay actor can't play a straight man is insulting."

March 2010: Almost two years after the Emmy withdrawal mess, Heigl leaves Grey's Anatomy. "I am done," she confirms. "We just finalized our agreement. Everyone had been working really hard to find an amicable and gracious way of letting go and moving on. It's sad but it's what I wanted." Sounds pleasant and drama-free, right? Read on…

December 2012: More than two years later, Rhimes does not sound thrilled by the way things ended with Heigl. "On some level, it stung," she tells TV Guide of Heigl's exit, "and on some level I was not surprised. When people show you who they are, believe them." Never before has a pearl of Oprah wisdom been deployed with so much shade.

October 2013: Ellen Pompeo, who despite being the show's star has remained admirably scandal-free, acknowledges the crazy backstage drama in an interview with the New York Post. "Hurt feelings, combined with instant success and huge paychecks started things spinning out of control," she says. "The crazier things got, as I watched all the tumult with Isaiah and then the Katie thing, I started to focus on the work. Maybe it's my Boston, blue-collar upbringing…I just tried to not pay attention to all the noise around me."

In the same interview, Pompeo got pretty real about the Heigl situation: "It was tough. You could understand why she wanted to go—when you're offered $12 million a movie and you're only 26. But Katie's problem is that she should not have renewed her contract. She re-upped, took a big raise and then tried to get off the show. And then her movie career did not take off." No lies detected here.

May 2014: Seven years on from his original firing, Washington returns to the show to a mixed reception from viewers, many of whom were incredulous that he'd ever be welcomed back. In response, Rhimes emphasizes her belief that he has learned from his mistakes: "Isaiah is a person that we all love and have loved for a very long time. I feel like there have been a lot of people that have been like, 'How can you do this?' And I feel very strongly and fully believe in people's ability to grow and change and learn from their mistakes and when they know better, to do better. If people don't think that, over the course of seven years, it's possible for a human being to change, then there really is no future for the human race at all."

"My first decision and my first responsibility is to the story," she explains. "I have to be the keeper of the story and make sure that we're telling the story we need to tell, regardless of whatever outside factors are involved." Burke returned for just one episode, aptly titled "We Are Never Ever Getting Back Together," and it ends up being a nice piece of closure for longtime fans.

October 2014: Rhimes is still holding a grudge against Heigl though—so much so that she literally uses her name as a synonym for "assholes" during an interview with The Hollywood Reporter. "There are no Heigls in this situation," she said, in praise of the Scandal cast. "I don't put up with bullshit or nasty people. I don't have time for it."

November 2014: Heigl responds to Rhimes: "I have nothing negative to say about Shonda," she tells Mario Lopez. "I'm a big fan of her work…I'm sorry she's left with such a crappy impression of me. I wish I could do something to change that. Maybe I will be able to someday."

April 2015: The unthinkable happens. McDreamy is killed off a full season before his contract is up. The show and its fans alike will never fully recover from the loss of Dr. Derek Shepherd, who—adding insult to injury—dies as a result of incompetent medical care after a car crash. Killing McDreamy, and the show's central love story along with him, was such a shocking move that it didn't take long for rumors to start flying about the reason for Dempsey's departure.

Depending on which tabloid version of the story you choose to believe, Dempsey was fired either for acting like a diva on set, having a "messy and emotional" affair with a show staffer, or both. In any case, he got on the wrong side of Shonda, and McDreamy was history.

Dempsey gives an exit interview to EW—which, incidentally, got leaked before his final episode aired, thus spoiling one of the biggest moments in TV history—saying he had an "amazing run" on the show. He describes his exit as "surprising," adding that "it just sort of evolved. It's just kind of happened." He does not specifically address any rumors, but says everything's good with Rhimes and Ellen Pompeo. Asked if he's leaving in a good place with them as a whole, Patrick only replies, "I think so, yes."

November 2015: On The Nightly Show With Larry Wilmore, Rhimes admits to killing off a character because she didn't like the actor. "I'm not naming names," she says. But everyone knows who she's talking about.

December 2015: Dempsey responds to Rhimes's killing-off comment, telling EW, "I think she loves being provocative and that's fine for who she is. That gets people talking about all the stuff that she's doing." He also notes that she's promoting a book and three shows: "I think she knows how to deal with the media and what she needs to say to get the response that she's looking for."

April 2016: Heigl addresses her still-controversial Emmy comments, admitting that she took the show's writing too personally. "I didn't feel good about my performance," she explains onthe Howard Stern Show. "There was a part of me that thought, because I had won the year before, that I needed juicy, dramatic, emotional material. And I just didn't have that that season."

"I shouldn't have said anything publicly," she continues. "But at the time, I didn't think anybody would notice...I just quietly didn't submit. Then it became a story, and then I felt obligated to make my statement. And...shut up, Katie. I should have been like, 'It's personal, whatever.'"

April and May 2016: Rumors swirl that a main character is going to die at the end of season 12 and they intensify when Sara Ramirez tweets "that's a wrap" for Dr. Callie Torres. As it turns out, her character does not get killed off but instead exits the series gracefully. She and Rhimes each release beautiful, gratitude-filled statements. That's how you play nice.

This content is created and maintained by a third party, and imported onto this page to help users provide their email addresses. You may be able to find more information about this and similar content at piano.io
Advertisement - Continue Reading Below
More From Celebrity
Kate Middleton Wears an Oversized Barbour Jacket
J.Lo's New Song "In the Morning" Is Sexy AF
Advertisement - Continue Reading Below
The Queen Has Launched Her Own Gin
How Celebs Are Celebrating Thanksgiving This Year
Harry and Meghan Can't Comment on 'The Crown'
Charles & Will Supported Harry After Miscarriage
All the Black Friday Sales Royal Fans Need to Shop
Meghan's Mom Is Helping Her Heal After Miscarriage
Celebs Reveal Their Worst On-Screen Kisses
Duchess Kate Looks Stunning in a Pink Suit