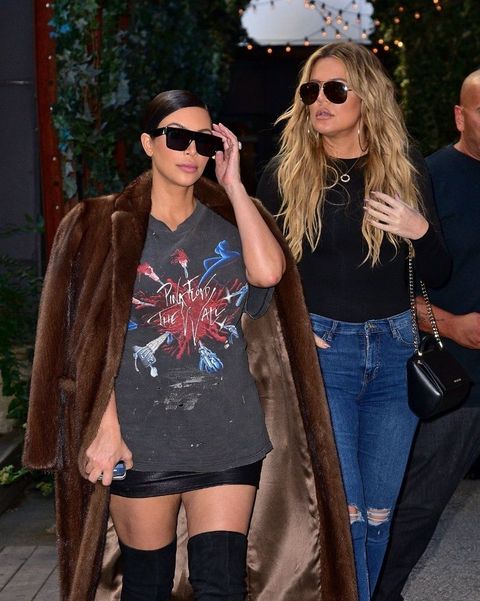 More than one week after Kim Kardashian was robbed at gunpoint in Paris, Khloé has come forward with an update on her sister and what the family's new social media plan is. On an episode of The Ellen DeGeneres Show airing Tuesday, Koko says Kim is "not doing that well." "It's incredibly traumatic what happened to her, but our family is super close and great and we'll get through it together," she says. "We do appreciate all your guys' love and support. It will take time. It's horrible what happened to her." Ellen, who was joined by special co-host Kevin Hart for the sit down with Khloé, also asked if the Kardashian-Jenners are making any changes to their Internet presence. Following the robbery, a source told People that Kim was "in shock and blaming herself" for Snapchatting her new $4 million ring from Kanye West so much. The ring was one of several items the thieves made away with in the $10 million jewel heist at l'Hotel de Pourtalès. "I think it is important to make those adjustments, pull back a little bit."

Elsewhere in the interview, Khloé also provides an explanation for Rob's baby shower drama, which resulted in Rob tweeting Kylie's number and Chyna later tweeting Rob's number. (Kevin Hart's explanation is also pretty solid, for what it's worth). According to Khloé, the family wanted to have a "DILF shower" and surprise Rob by having his high school and college guy friends over. "He took it the wrong way. He didn't show up. Chyna was in on it. Chyna knew it was for the guys. That's why Chyna tweeted out his number and whatever," Khloé says. "Honestly I'm confused now. It's tiring."

Couldn't have said it better myself.

According to Khloé, the newest Kardashian will arrive in four weeks. So. Excited.

This content is created and maintained by a third party, and imported onto this page to help users provide their email addresses. You may be able to find more information about this and similar content at piano.io
Advertisement - Continue Reading Below
More From Celebrity
Celebs That You Forgot Were on MTV Shows
The Best TV and Movie Wedding Dresses of All Time
Advertisement - Continue Reading Below
47 'Friends' Facts Every Superfan Should Know
40 Celeb Exes Who Worked Together After a Breakup
35 Unforgettable Royal Wedding Scandals
The 50 Most Popular Episodes of ‘Friends,’ Ranked
Iconic Party Photos From the Past