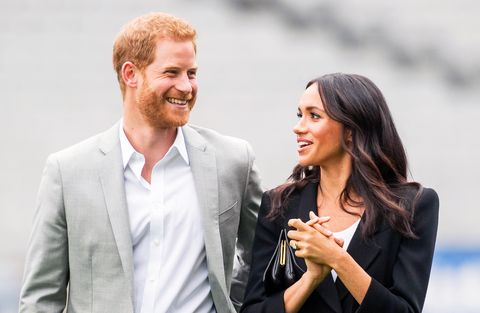 Yesterday, Prince Harry celebrated his 34th birthday and royal family FOMO reached a new high. Although we don't know for sure just how Harry's family celebrated his birthday behind closed doors, we can make an educated guess about how his wife, Meghan Markle, made the day special.

As People reports, the Duchess of Sussex was an open book on social media and her now-shuttered lifestyle blog, The Tig, before joining the royal family. During her time as a part-time blogger, Meghan shared a lot of hints about how she likes to make people feel special on their most special days.

She probably wrote him a heartfelt note:

Meghan, like Harry's late mother, Princess Diana, is a huge fan of handwritten notes. She loves putting her feelings down on paper and she probably had a lot of feelings to share with Harry on his first birthday as her husband.

“If given the option between fingers to keyboard, or pen to paper, I will always choose the latter,” she wrote before her royal days.. “Because amongst the throwback things that I love (a ’62 porsche speedster à la Dylan McKay in 90210, a bevy of Vargas girls, a Busby Berkeley film, or cooking over a charcoal grill), what trumps all is my love of writing (and receiving) a handwritten note.”

She probably gave him a creative gift:

Meghan has made it clear in the past that she does not gift the men in her life with cliché presents. Instead, she probably bought Harry something he never even realized he'd always wanted or made him something herself.

"It’s easy to grab another T-shirt for your man — but you’ll likely steal it for PJs anyway. Instead, give him something creative that he’ll actually enjoy," she wrote.

She probably cooked him a very special birthday dinner:

Meghan is a self-proclaimed foodie and cook. Home-cooked meals are even part of how she and Harry bonded early in their relationship. It would be a little shocking if a special dinner weren't part of her birthday plan for Harry.

“Some days you have a bite of food that makes you go ‘woah.’ Your eyes widen, you look down at the plate, almost pushing things around with your fork to see what’s making it so special. You take another bite, smiling as you do so, almost laughing, because it’s just so damn good," she wrote.

[H/T People]
Kayleigh Roberts Contributor Kayleigh Roberts is the weekend editor at Marie Claire, covering celebrity and entertainment news, from actual royals like Kate Middleton and Meghan Markle to Hollywood royalty, like Katie Holmes and Chrissy Teigen.
This content is created and maintained by a third party, and imported onto this page to help users provide their email addresses. You may be able to find more information about this and similar content at piano.io
Advertisement - Continue Reading Below
More From Celebrity
Chloe From 'Too Hot to Handle' Is in 'The Circle'
Comparing the Two Biggest Royal Weddings
Advertisement - Continue Reading Below
Kate, George, and Charlotte Were Seen Shopping
J.Lo Shares First IG Photo Post A-Rod Split
Harry Has Experienced "Frostiness" from Royals
Billie Eilish Just Debuted a Bouncy Blonde Blowout
Gigi Shared an Adorable Spring Selfie With Khai
Katie Holmes Posted a 15th Bday Tribute to Suri
Chrissy Teigen Talked Stigma Around Infertility
Beyoncé Stuns in a Mesh Dress With Matching Gloves