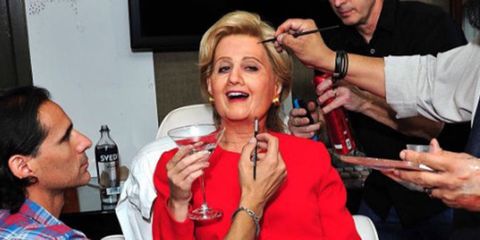 Katy Perry has a well-established history of going all out for Halloween, but she completely outdid herself this year by going as an ultra-realistic Hillary Clinton.

Perry had the help of a team of professional makeup artists and documented her transformation into the Presidential candidate on Snapchat. She took the costume very seriously, sitting while a slew of facial prosthetics were applied and declaring in her caption, "I don't play games on Halloween."

She posted updates throughout the lengthy transformation process (makeups like this take a *long* time):

And the finished look was so on point, you'll have to do a double take.

When Perry stepped out for the night, someone (presumably Orlando Bloom, but TBH, who knows with all that makeup) accompanied her as Bill Clinton and a few other friends dressed in black suits as her secret service detail to complete the Presidential entourage.