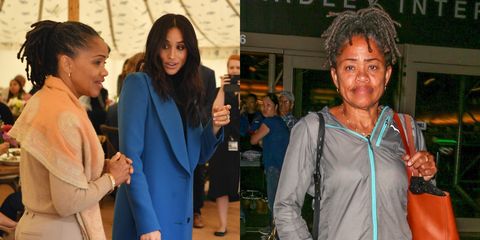 After visiting the United Kingdom to support Meghan Markle at the celebration of her charity cookbook, Together: Our Community Cookbook, Doria Ragland is officially back in the U.S.

Related Story
Doria Ragland Is Getting Closer to the Royals

Earlier this week, Doria joined Meghan, along with Prince Harry, and women from the Hubb Community Kitchen, to celebrate Together, which Meghan decided to publish in support of those affected by the Grenfell Tower fires last year.

At the event, Doria reportedly mingled and introduced herself to people as "Meg's mom."

This weekend, Doria was spotted arriving home in Los Angeles after her trip. Doria wore a low-key grey tracksuit and white sneakers for the flight.

Being a royal in-law means being a bit of a celebrity and some of the photos show Doria being escorted, arm-in-arm, through LAX by an airline employee.

Doria's latest trip only adds fuel to the rumors that she's planning a permanent move to the UK to be closer to Meghan and the rest of the royal family. The royal family loves Meghan and they reportedly love Doria, as well. In fact, her appearance at Meghan's cookbook launch speaks volumes about how the Queen and the rest of the royals feel about their newest in-law. It's unprecedented for a royal in-law to attend a royal engagement (Kate Middleton's parents never have) and is a huge sign that Harry's family want to make Meghan and her mom feel totally welcome.

"The Queen knows it’s a big transition for Meghan and she wants it to be a success," a source told Vanity Fair. "That means making sure Meghan feels supported and happy, and including her mother."

Sources close to the royal family have also made it clear that Doria is well-respected among the royal inner circle.

"When you meet Doria, it all falls in place. You understand why Meghan is who she is," a courtier recently told Vanity Fair's Katie Nicholl.