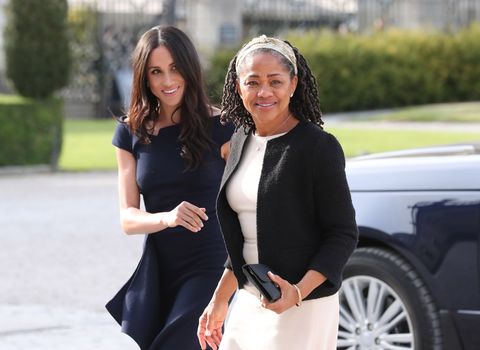 Anyone who follows the royal family knows that Meghan Markle has had her share of family ~drama~. The Duchess of Sussex has had to deal with an onslaught of bad press courtesy of her father, Thomas Markle, and her half-sister, Samantha Markle. At leas one member of Meghan's family, however, has been nothing but sweet and composed since Meghan started her path to royalty: Her mom, Doria Ragland.

"She is getting ready to move to London. I think she will be going as soon as possible. I know that she was eager to live closer to her daughter," one source told the publication. "She also fell in love with England and told me when she got back that it’s somewhere she believes she too could happily live."

Regland has reportedly already been making preparations for a big move—like quitting her job as a social worker for the Los Angeles-based Didi Hirsch Mental Health Services clinic in May.

There's no doubt Meghan would be ecstatic to have her mom close by. Ragland famously met with the Queen for tea ahead of the royal wedding and reportedly got along well with the monarch. Meghan's husband, Prince Harry, also gets along with Ragland, who was the only member of Meghan's family he met before the wedding (and, since her dad skipped the big day, remains the only member of his wife's immediate family he's met).

Ragland joined Meghan and Harry at the Invictus Games in Toronto in 2017.

"Doria and Meghan have always been inseparable," another source told the Daily Mail. "Doria is beside herself with excitement at the thought of moving to London."