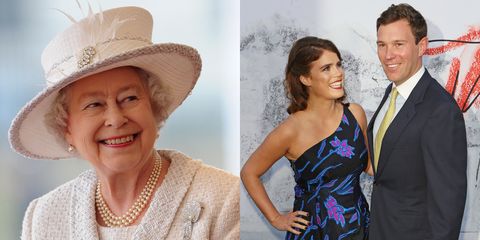 We are mere days away from the second royal wedding of 2018. On October 12, Princess Eugenie will marry Jack Brooksbank in Windsor. The ceremony will be held in at St. George's Chapel—the same place Prince Harry and Meghan Markle had their wedding. Eugenie's wedding has actually been compared to Harry and Meghan's fairytale day a lot, and there have been some similarities. In addition to sharing a venue, Eugenie and Jack are also inviting members of the public to attend their wedding, just like Harry and Meghan did. Eugenie's bouquet will also be similar to Meghan's according to Town & Country.

Related Story
All of the Details on Princess Eugenie's Wedding

One thing that might differ quite a bit, however, are the gifts that Eugenie and Jack receive, particularly from her grandmother, Queen Elizabeth. The Queen famously gifted Harry and Meghan York Cottage on her beloved Sandringham Estate. Don't let the word "cottage" fool you—York Cottage is large and gorgeous:

The Queen has given luxurious properties as wedding gifts before. She gave Sunninghill Park to Prince Andrew, Birkhall to Prince Charles, and Anmer Hall to Prince William and Kate Middleton.

So, will Eugenie get a fancy cottage at Sandringham to call her own? Not necessarily, according to experts.

The past two major Royal Weddings we saw were for Princes William and Harry, one who will be the future king and his brother. They are and will be, full-time working royals for the rest of their lives. One of the perks of this is Her Majesty can justify the lavish properties she has gifted them in return for their duty to the crown," Jamie Samhan, deputy editor at Royal Central explained to MarieClaire.com. "Unfortunately for Princess Eugenie who marries Jack Brooksbank this Friday, she is not working royal despite the tries from her father Prince Andrew to promote both his daughters to the roll. This also means that The Queen will likely not gift a glamorous to Eugenie and Jack. There are, however, smaller properties that could fit nicely for the newlyweds!"

There's a good reason why Eugenie's gift might not be as extravagant as the homes Elizabeth gave Harry and Meghan and Will and Kate.

"It's unlikely to be as extravagant as the property and Dukedom she gave to Prince Harry as a wedding gift, because those gifts are usually only given to full-time senior working royals," Eloise Parker, royal commentator, explained to MarieClaire.com. "Eugenie has a successful career in the art world, outside of the royal family and doesn't fall into this category."

Since Eugenie and her sister, Princess Beatrice, don't meet the definition of "working royals," they don't need the same ultra-posh escape that their cousins need. And, according to Brookes, that's not likely to change for Eugenie after her wedding.

So what will Elizabeth give Eugenie? We can look to her cousin, Zara Tindall, for a clue. Zara, the daughter of Princess Anne, is another non-working royal and she married rugby player Mike Tindall in 2011.

At the time, Queen Elizabeth gave Zara a £40,000 gift by closing Holyroodhouse for five days for her wedding. The closure cost the Royal Collection £40,000 in admissions, which the Queen reimbursed out of her own accounts, according to The Sun. Of course, Zara hasn't been given a royal title (Eugenie, who is a princess, obviously has), so she's not an exact corollary for Eugenie, either.

Ultimately, we all just have to wait and see what the Queen decides to gift Eugenie on her big day.