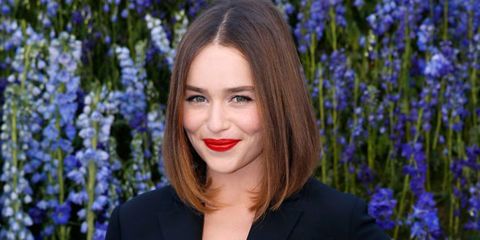 Emilia Clarke is trading in dragons for X-Wings.

The Game of Thrones star has landed a coveted role in the upcoming (and still untitled) Star Wars prequel about Han Solo, a character made iconic by Harrison Ford in the original trilogy—Star Wars, The Empire Strikes Back and Return of the Jedi—and last year's blockbuster The Force Awakens. Alden Ehrenreich will play the young Solo, with Donald Glover taking on Lando Calrissian, a role originated by Billy Dee Williams.

@emilia_clarke is heading to a galaxy far, far away in the upcoming untitled Han Solo #StarWars movie.

According to the StarWars.com announcement, "Clarke's role will round out a dynamic cast of characters that Han and Chewie will encounter on their adventures."

The latest installment in the Star Wars saga, Rogue One: A Star Wars Story heads to theaters December 16. Also a prequel, it takes place before the original Star Wars film and tells the story surrounding the capture of the internal plans for the Death Star. The Han Solo prequel is due in theaters in 2018.

Julie Kosin Senior Culture Editor Julie Kosin is the senior culture editor of ELLE.com, where she oversees all things movies, TV, books, music, and art, from trawling Netflix for a worthy binge to endorsing your next book club pick.
Advertisement - Continue Reading Below
More From Celebrity
Why Harry and Meghan Should Keep Their Protections
Taylor Swift Explains Why She Loves Joe Alwyn
Advertisement - Continue Reading Below
Real Humans Justin & Jessica Are Going to Therapy
Why the Queen Canceled One of Her Annual Events
Channing Tatum Shuts Down Jessie J Hater on Insta
Celebrities Who Are Mistaken for Other Celebs
Dolly Parton, Icon, Started a Viral Meme
Meghan & Harry's Trademark's Been Blocked for Now
Khloe Kardashian's House Has a Room for Extensions
Katie Holmes Stuns in a White Oversize Coat