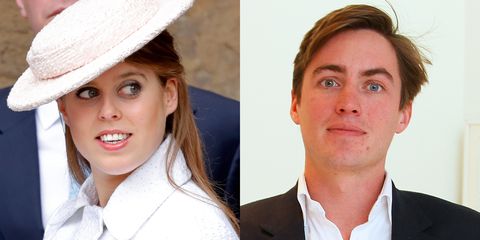 Maybe Princess Beatrice’s been inspired by her sister’s wedding! According to multiple sources, the royal has gotten serious with property developer Edoardo Mapelli Mozzi. The Daily Mail reports that he’s already met the Duke and Duchess of York, and things are moving quickly.

Edoardo is a multi-millionaire CEO of property firm Banda, and has been a friend of the family for a while. E! News notes that he’s known Beatrice for years even though this pairing is fairly recent (they got together just before Eugenie’s wedding). According to People, Edoardo’s late stepfather, Christopher Shale, was a friend of Beatrice’s parents, and Fergie and Edoardo follow each other on Twitter. In this day and age, that’s obviously the healthiest sign of any relationship, right?

Edoardo is—scandal!—already divorced and a father of a two-year-old son named Wolfie. Of course, royal tradition has improved of late: It’s no longer taboo to marry someone who was previously divorced. Just look at royal newlyweds Prince Harry and Meghan Markle (Markle was previously married to movie producer Trevor Engelson) and, of course, Prince Charles and Camilla. So that’s not necessarily a deal-breaker for the young royal.

Before this new romance, Beatrice’s last relationship with American exec Dave Clark. The two dated for a whopping 10 years before splitting in 2016.

Princess Eugenie’s gorgeous wedding last month to Jack Brooksbank made international news. Of course, Beatrice was right by her sister’s side as maid of honor in a purple Ralph and Russo dress with sort-of-but-not-quite matching fascinator. This was, of course, right on the heels of that other royal wedding people can’t stop talking about.

We’re already a fan of Beatrice because she just feels so normal, including the fact that she takes Ubers like a totally regular person. So we can’t help but root for this new relationship and want the best for her.

38 Unrecognizable Photos of the Kardashians
Katherine J Igoe Katherine’s a Boston-based contributing editor at Marie Claire online who covers celebrity, fashion, entertainment, and lifestyle—from “The Bachelor” to Everlane to Meghan Markle.
This content is created and maintained by a third party, and imported onto this page to help users provide their email addresses. You may be able to find more information about this and similar content at piano.io
Advertisement - Continue Reading Below
More From Celebrity
Gwen Stefani Is Unrecognizable In New Insta Post
Lady Gaga Wore Serious Platform Heels in Rome
Advertisement - Continue Reading Below
North West's Pet Lizard Has Its Own SKIMS
Is Harry & Meghan's Archewell Update a Royal Diss?
Why Is the Royal Family Called "The Firm?"
Meghan Says Palace Is “Perpetuating Falsehoods"
Twitter Blasts Media's Targeting of Duchess Meghan
Palace Is Looking Into Meghan Bullying Allegations
Meghan & Eugenie Are Still Close After Royal Exit
Harry's Oprah Interview Suit Is a Nod to Archie