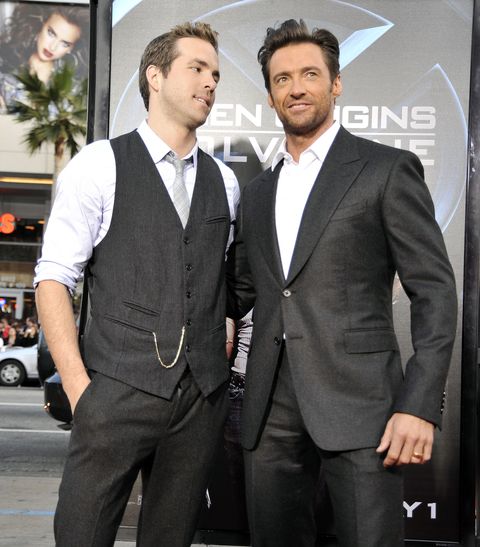 Make a list of celebrities who are hilarious on Instagram. Done? Good. Is Ryan Reynolds on it? Statistically speaking, he should be. The Deadpool star is notoriously hilarious, regularly (and expertly) trolling himself, his brilliant and beautiful wife, Blake Lively, and just about anyone else who comes in contact with him on Instagram.

That's what makes today such a momentous occasion. The king of playful Instagram trolling was playfully trolled and the prank is perfect in its simplicity. To understand the greatness of the prank, however, a little background is necessary.

For a few years now, Reynolds has been nurturing a faux feud with X-Men star Hugh Jackman, who has played superhero Wolverine in nine movies (with photo and archival appearances as the character in two more—Deadpool and Deadpool 2). The idea behind the long-running joke is that Reynolds' character, the snarky, wise-cracking, only-kind-of-sort-of-a-hero and, most importantly, fourth wall breaking Deadpool delights in mocking the face of the X-Men franchise, Jackman.

To that end, Reynolds has poked fun at Jackman on his own Instagram account from time to time. There was the time Jackman tried to record a heartfelt birthday message, but was interrupted by the true Greatest Showman, Reynolds-as-Deadpool, singing "Tomorrow" from Annie in the background.

#Repost @thehughjackman ・・・ When you’re trying to record a heartfelt birthday message ... but are interrupted by the least greatest showman. @vancityreynolds

And the time he used this picture to wish Jackman a happy birthday:

Happy Birthday to the ageless, one and only @thehughjackman

The feud is all fake though, of course, as evidenced by the cute pictures they pose for together:

And the genuine support Reynolds has shown for Jackman and his work:

Logan. Everybody's saying it's the best X-Men film ever. It's better. @thehughjackman and @sirpatstew own every frame of this masterpiece. Huge tip of the hat to James Mangold.

Reynolds also has a playful, fun relationship with his Life costar, Jake Gyllenhaal:

Bringing heavyweight drama to the premier for #LIFE movie.... #SXSW. These guys are obviously wearing white tube socks under their suits.

Now you're all caught up and ready to appreciate the glory of the prank Jackman and Gyllenhaal teamed up to pull on Reynolds. It's so simple, yet so brilliant. It's so Legally Blonde. They invited him to a party and pretended there was a theme when, in fact, there was no theme. Behold:

These fucking assholes said it was a sweater party. 🎄

Reynolds, who took the joke well enough to post about it on his own Instagram, captioned a series of photos from the prank, "These f**king a**holes said it was a sweater party. 🎄"

If you're thinking, "Well, this is a Comments by Celebs goldmine," you're right, because it is.

Let the guy in. #CommentsByCelebs

The posted has been liked by and commented on by the likes of Emilia Clarke, LeBron James, and Josh Brolin:

And, while Reynold's wife, Blake Lively, does not appear to have jumped in on the trolling, her half-sister, Teen Witch actress Robyn Lively, did:

Jackman and Gyllenhaal (who joined Instagram just two short weeks ago), took things to the next level with their posts about the prank, which included some hilarious photoshopping:

Honestly, it’s really hard to breathe in this thing.

Kayleigh Roberts Contributor Kayleigh Roberts is the weekend editor at Marie Claire, covering celebrity and entertainment news, from actual royals like Kate Middleton and Meghan Markle to Hollywood royalty, like Katie Holmes and Chrissy Teigen.
Advertisement - Continue Reading Below
More From Celebrity
Kim and Kourtney's Fight Shut Down KUWTK Filming
Dolly Parton Will Read You a Bedtime Story
Advertisement - Continue Reading Below
Prince Harry and Meghan Markle's 53 Cutest Moments
RiRi Was Shocked by the Reaction to Fenty Beauty
Behold: Celebrities Who Dated Normals
Kate Middleton & Michelle Obama Use This $64 Cream
A Full Timeline of Tyler C. & Hannah B.
Blake and Ryan Donate $400K to NY Hospitals
Prince William May Work as an Air Ambulance Pilot
Harry Is Likely to Get U.S. Diplomatic Status