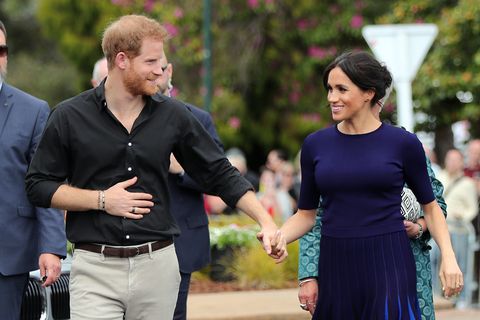 Pregnancy is a pretty amazing thing, just objectively speaking. We take it for granted, but it's women growing whole new humans inside their bodies, which is just wild and weird and impressive as hell. Like most impressive feats, of course, it also requires some sacrifice—specifically, for some, choosing to give up some adult human favorites, like alcohol and caffeine, for nine months.

Because some gender inequalities are just built in to nature, women are the ones who get hit with these specific sacrifices. Because gender inequality sucks no matter what, some men choose to even the playing field by willingly making these sacrifices along with their expecting partners. Prince Harry is, apparently, one of these men—at least if unnamed "sources" speaking to the British press are to be believed.

"Considering he’s been a pretty brutal drinker since he was a young teenager, it’s quite an achievement," a source close to the royals said, according to Express, explaining that Harry has swapped alcohol and caffeinated drinks for ultra-healthy mineral waters.

Not only is this a very sweet move for Harry as a husband, the source also says it's been good for his overall health and well-being, too.

"He was always fidgeting and on the go, always looking for the next thrill. He was a great laugh but it was always very full on...Now his new regime doesn’t make him the most entertaining party guest in the world, but he’s definitely more chilled and relaxed."

Of course, Meghan's healthy influence on Harry dates back long before she realized she was growing an adorable little royal inside her. Friends of the royals reported (anonymously, so again, grain of salt) that Harry started making lifestyle changes inspired by Meghan before they were even engaged.

“All she did was show him there’s another way to live and he’s become a huge fan," an

Express source said. "He eats well, doesn’t poison his body, exercises, does a bit of yoga and is a lot happier."

Consider these one set of royal rumors that we actually want to believe are true.

Related Stories
Prince Harry Skipped a Royal Tradition for Meghan
How Meghan Markle Got Prince Harry Into Shape
[H/T: Express]
Kayleigh Roberts Contributor Kayleigh Roberts is the weekend editor at Marie Claire, covering celebrity and entertainment news, from actual royals like Kate Middleton and Meghan Markle to Hollywood royalty, like Katie Holmes and Chrissy Teigen.
This content is created and maintained by a third party, and imported onto this page to help users provide their email addresses. You may be able to find more information about this and similar content at piano.io
Advertisement - Continue Reading Below
More From The Ultimate Guide to the Royal Family
William Will Suffer "Worst" from Harry's Memoir
Harry's Friends Don't Want to Be in His Memoir
Advertisement - Continue Reading Below
Will & Kate's Modern Approach to Raising George
Why Harry's Memoir Release Date Has Upset People
The Royals Are Worried About Prince Harry's Memoir
Harry Is Putting the Queen in a Difficult Position
Are Will & Kate Sending a Message to Harry & Meg?
Harry and Meghan Reportedly Have a Four-Book Deal
Rare Photos From Diana and Charles' Wedding
Prince George Looks So Grown-Up in New Portrait