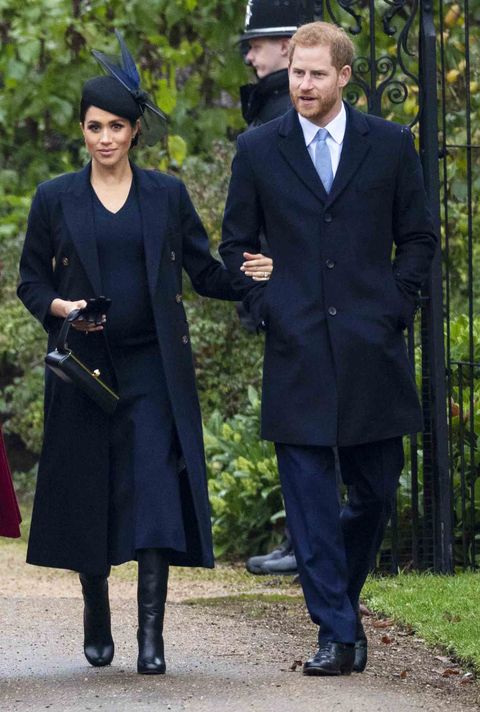 For the most part, Meghan Markle's acclimation into the royal family has been pretty seamless. Her royal in-laws seem to love her, gushing about her, and calling her "the best thing" to have ever happened to Prince Harry.

But there have been a few instances where Meghan's beliefs have bumped up against royal traditions in a big way—particularly when it comes to the royals' love of hunting. Meghan, a well-known animal rights activist, is understandably not the biggest fan of that tradition. And hunting is a big part of several royal family traditions, like Boxing Day and the family's annual Balmoral vacation.

Back in 2017, reports surfaced that Harry had skipped The Firm's Boxing Day hunt for Meghan when they were engaged. At the time, a source told the Sun :

"The Boxing Day shoot was always going to be a tricky issue. Meghan is a keen animal rights campaigner and doesn’t like hunting in any form. Harry loves it and has always been out there on Boxing Day. But if it means breaking with long-standing royal traditions to avoid upsetting her, so be it."

Then, in September, reports made the rounds that Harry had shocked the rest of the royal family by skipping the grouse hunt in Balmoral, as well.

"If Meghan’s not comfortable with him doing the shoot, he wouldn’t want to upset her," the Sun's royal source said.

Given all the reports of Harry skipping shoots and giving up his hunting hobby for Meghan, many assumed he would also skip the 2018 Boxing Day hunt, but you know what they say about when you assume, right?

"There were never any questions that he wouldn’t participate in that," a source told Us Weekly. The source also added that Meghan accompanied her sister-in-law, Kate Middleton, to the post-shoot lunch at the log cabin on the royal family’s estate, meaning that even Megs got in on the traditions of the hunt.

Does this mean Harry is a hunter again? Does it mean he never wasn't one? Does it mean we should all just give up on speculating about what the royals are going to do and accept that they're unpredictable human beings just like the rest of us?

Yeah, probably the last one.

Related Stories
Meghan Markle Just Broke Royal Tradition
Prince Harry Skipped a Royal Tradition for Meghan
Kayleigh Roberts Contributor Kayleigh Roberts is the weekend editor at Marie Claire, covering celebrity and entertainment news, from actual royals like Kate Middleton and Meghan Markle to Hollywood royalty, like Katie Holmes and Chrissy Teigen.
This content is created and maintained by a third party, and imported onto this page to help users provide their email addresses. You may be able to find more information about this and similar content at piano.io
Advertisement - Continue Reading Below
More From Celebrity
Blake Lively Reacts to Gossip Girl's Identity
Harry Said He Didn't Understand Unconscious Bias
Advertisement - Continue Reading Below
Joe Jonas Took a Stroll With Daughter Willa
Lizzo Stuns With Bright Red Hair and Bangs
William and Kate Are Hiring a Live-In Staff Member
Gigi Hadid Says She Voted With Her BB
Will Asked His Uncle to Talk to Harry About Meghan
Why the Queen Denied Meghan's Wedding Tiara Pick
Will & Harry's Reactions to Their Parents' Divorce
LOL, Kelly Ripa Comments on Her Hubby's Bulge 🍆