There was a time, not too long ago, when every holiday was marked by an epic party, hosted by Taylor Swift. The singer was probably best known for her over-the-top Fourth of July parties on her Rhode Island estate, but she was down to have a crew of famous friends over for just about any occasion, especially if baking and/or themed outfits were involved.

After taking a big step back from the public eye for the last few years, purging her Instagram account, and almost exclusively posting professional, promotional stuff (with the occasional cat lady picture or birthday shoutout mixed in), Taylor is back to hosting her famous friends. Or, at very least, she's back to inviting the rest of us to take a peek inside those parties.

Last night, Taylor hosted a very Taylor-y New Year's Eve bash with the theme "dress like your childhood hero." In attendance was what can only be described as a gaggle of celebrities, including Blake Lively (as Dorothy Gale from The Wizard of Oz), Gigi Hadid (as Mary Poppins), and Ryan Reynolds (as Ryan Reynolds in a grey suit and undone red tie, it appears). Taylor dressed as Ariel from The Little Mermaid, complete with red wig and crab purse.

"Mary Poppins, Audrey, Ariel, Ms. Frizzle, Cinderella, Gwen, Mr. Toad, Avril, Nancy Drew, Posh Spice, Rizzo, Frida Kahlo, Steve Irwin, Dorothy.. This new year we decided to dress up as our childhood heroes. Sending you all love and hope going into 2019 💗," she wrote by way of a caption in a series of pictures highlighting her party guests' amazing ensembles.

Scroll through the entire set for a picture of Taylor and Ryan chugging his signature Aviation Gin straight from the bottle. 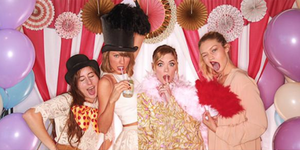 The Two Things Every Taylor Swift Party Has
The Slow Sexual Awakening of Taylor Swift
Kayleigh Roberts Contributor Kayleigh Roberts is the weekend editor at Marie Claire, covering celebrity and entertainment news, from actual royals like Kate Middleton and Meghan Markle to Hollywood royalty, like Katie Holmes and Chrissy Teigen.
Advertisement - Continue Reading Below
More From Celebrity
Kylie Threw Stormi the Most Elaborate Party
Chrissy and John Had a Post-Grammys Dance Party
Advertisement - Continue Reading Below
Selena Gomez Sent an Emotional Note to Demi Lovato
Nick Jonas Had Food In His Teeth at the Grammys
Why Isn't Beyonce at the 2020 Grammys?
Watch Demi Lovato's Emotional Grammys Performance
Beyoncé's Pre-Grammys Look
Blake and Gwen Were Too Cute at the Grammys
The Jonas Brothers' Grammys Performance Was a Lot
Alicia Keys Covers 'Someone You Loved'